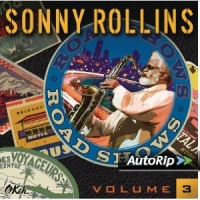 Look beyond harmony, go past technique, and pay no mind to personality. When you do all of that, Sonny Rollins still remains one of the greatest improvisers to ever wield an instrument. And why is that? The answer is simple: Rollins is forever in a state of becoming. He's the rare player who doesn't play towards a destination; he plays for the journey, and his journeys are epic and legendary.

While that's hardly news to any longtime jazz fans, those who need a reminder need look no further than Rollins' Road Shows—compilations of live performances cherry-picked by the man himself. These albums have helped to further his already-sterling reputation as a concert artist. In the studio, Rollins may always feel like he's forced to manufacture a moment, but on the stage, he exists in the moment, and that's the Sonny Rollins that shines through on these offerings.

Virtually all of the Rollins hallmarks are highlighted during this six song program. "Biji," a winner recorded at a concert in Japan in 2001, serves as an exuberant swing-to-funk starter. A 2007 "Someday I'll Find You" follows, with Rollins' horn exuding beauty and soul in seemingly effortless fashion. Percussionist Kimati Dinizulu's wind chimes and shakers are a bit of a distraction on that one, but they don't dampen the spirit of the performance. Next is "Patanjali," a steady churn-and-groove number that's appearing for the first time on record here; it's essentially a vamp that gives Rollins a platform to stand on while he blows.

The second half of the album opens with an eight-and-a-half minute Rollins cadenza—the simply titled "Solo Sonny." Quotes-a-plenty appear here, but Rollins' daydreams serve as the connective tissue between them. A version of "Why Was I Born?" finds everybody in high spirits; it's an upbeat gem that doesn't want to end. Guitarist Bobby Broom gets his say, Rollins and drummer Steve Jordan have a ball batting solos back and forth, and a good time is had by all. The final track—a brief-and-almost-satisfying "Don't Stop The Carnival"—is a snapshot of a Rollins calypso. It's pure positivity, like Rollins himself.