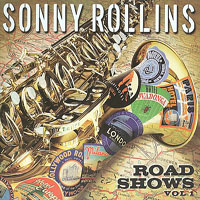 There's a YouTube video where Sonny Rollins' longtime trombonist Clifton Anderson discusses playing with the saxophone colossus. Anderson recalls one night when the members of the band thought they were in a pretty good groove. Then Rollins gazed over at Anderson, with a look that said, "Oh, you guys feel like playing tonight. You wanna play? OK, we're gonna play." Anderson says Rollins then proceeded to "take it up and he took it so far up that he left us like rubble on the stage. Everybody was like in their fifth gear and Sonny, apparently, was just in second gear." Anderson calls it a "mind-boggling experience."

Road Shows, Vol. 1, a live compilation culled from Rollins' private archives and soundboard tapes made by collector Carl Smith, contains many similarly mind-boggling moments. Each of the seven tracks, recorded between 1980 and 2007 with various working groups (featuring stalwarts like bassist Bob Cranshaw, guitarist Bobby Broom and drummer Al Foster, among others), finds Rollins in top form, delivering one stunning performance after another. Remarkably, his playing here shows no sign of a falloff over the years; his improvisations are just as exuberant and athletic as he nears 80 as they were more than two decades earlier.

He solos with exhilarating abandon through at least 35 choruses of the opener "Best Wishes," never repeating himself or revealing the slightest hint of fatigue. The usual Rollins fodder follows—some ancient Tin Pan Alley tunes, a calypso number, plus originals from throughout his more than 50-year career (from the blues-bop workout "Tenor Madness," first recorded with John Coltrane in 1956, to "Blossom," an obscure gem from a 1980 date in Sweden). The album closes with a magnificently restrained rendition of "Some Enchanted Evening," in the estimable company of drummer Roy Haynes (another ageless wonder) and bassist Christian McBride, from last year's acclaimed Carnegie Hall concert, which marked the 50th anniversary of his first appearance there.

Road Shows, Vol. 1 is the live album Sonny Rollins fans have been waiting for—and best of all, more releases from the Rollins archives are to follow.