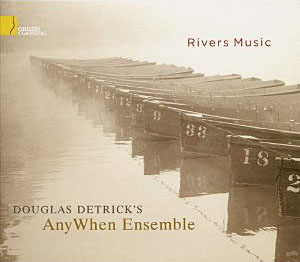 The preciousness of youth. Douglas Detrick is not even 30 years old, and already has multiple ensembles and music projects going on the East and West coasts. One such music combo is the AnyWhen Ensemble, which Detrick terms a "Chamber Jazz Group." The music he pushes through this group is not as easily categorized. Part of the charm is that the makeup of the AnyWhen ensemble resembles more a "parlor" ensemble of family musicians, bringing whatever instrument they can play to bear rather than a traditional chamber ensemble.

Detrick's quintet consists of his trumpet, along with two reeds (saxophone, oboe), cello and drums. The composer, indeed, covers all of the high and low places with this format, while remaining squarely in the sonic mid-range during performance. "Rivers Music" is an extended composition clocking in at just over 40 minutes and made up of six movements that alternate between ensemble and solo instrument improvisation. The composition's personality is one of modern introspection intersecting with 19th Century pastoral harmony.

Following an introductory ensemble salvo, a triptych movement begins with an ensemble improvisation resembling a fractured canon that gives way to an alto saxophone section played by Hashem Assadullahi, with percussion backing from Ryan Biesack. The last leaf of this triptych movement is a bassoon setting for Steve Vacchi, whose burping and popping horn begs the question of how a bass clarinet would have sounded in its place. Detrick rates a full movement for his plaintive trumpet improvisation, which probes in the same way that Tomasz Stanko does on his harmonic wanderings.

"Rivers Music" is thought music rendered as stream-of-conscious expression. it is not totally free, but not totally tethered either. Detrick sets up his scaffolding and then allows broad latitude to the rest of the quintet to fill in the spaces, which they do, collectively and alone, with intelligence and warmth.