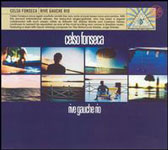 There's something especially unique about the way a Brazilian strums an acoustic guitar. Perhaps their rhythms play from a memory, instinctive not thought, inherited through generations of moonlight strolls on the beach, soft cool breezes caressing warm soft tanned skin, memories of romance and passion.

The heart of Celso Fonseca's second international release beats from his acoustic guitar and vocals—incredibly light, deceptively rhythmic, irresistibly romantic—supported by bassist Luiz Alvez and drummer Alexandre Foncesa (no relation). But he also uses the cool jazz sounds of flute, flugelhorn, and Fender Rhodes to expand upon the instrumentation of his masterful, understated debut, Natural. Written in Portuguese, Spanish, and English, Fonseca admits, "All these songs are love songs of one kind or another.

If you can write such beautiful love songs, why write anything else?

Attempting to analyze or describe the intuitive genius of music this romantic seems to only serve to destroy it. Fonseca's solo "My Broken Heart and Damien Rice's "Delicate —a melancholy blue dance between percussion, vocals, and guitar—are no less rich from such bare instrumentation. With a wink and grin, Fonseca duets guitar and vocals on the charming "Don De Dluir with Jorge Drexler, who won the 2005 Oscar for Best Song ("Al otro lado del Rio, Motorcycle Diaries).

"Feriado and "Pousada merrily chirp and sparkle like mountain streams, bubbling with percussion then adorned with flute ("Feriado ) and flugelhorn ("Pousada ), each soaring overhead softly, just out of reach, graceful and beautiful birds in flight. Fonseca's "Bela is simply gorgeous Brazilian jazz-pop—subtle, soft, supple—that dances with the gracious and gentlemanly spirit of Jobim.

Fonseca is surely Jobim's heir apparent. Gorgeous music from his hands, like "Bela, sounds so advanced that it seems simple. Almost every song on Rive Gauche Rio begins and ends in the hands of this Brazilian singer strumming his shimmering acoustic guitar.

Visit Celso Fonseca on the web.