BY SCOTT ANDREWS
November 19, 2002
Sign in to view read count 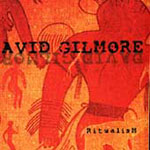 Jazz guitarist David Gilmore has definitely been around the block. He's played with Wayne Shorter, Trilok Gurtu, Don Byron, Cassandra Wilson, and the brilliant M-Base saxophonist and composer Steve Coleman in his group Five Elements. Not to be confused with the English guitarist David Gilmour of Pink Floyd fame, Gilmore stepped out for his first record as band leader and composer in 2000 with Ritualism, self-produced and self-released on the Kashka Music label.

A quartet of guitar, piano/keyboards, acoustic bass, and drums forms the core unit on Ritualism. Most of the tracks on the record are angular jazz in this quartet format, but guest musicians also appear on trumpet, alto, tenor, and soprano sax. One track each with female vocals and male spoken word flesh out the rest of the tunes. The balance of more sparse instrumentation on some pieces and the full sounding horn section (and/or vocals) on others provides sonic variety in Gilmore's songs and the one standard, the Monk tune "Off Minor." The vocal track "Confluence" features acoustic guitar and sounds markedly different from the rest of the snappy jazz. Although adept and emotive, the change in feel on this tune may drive some listeners to skip ahead. In contrast, the artsy themed spoken word in "Musical Revolutions" fits right in with the supporting music in that tune and blends well with the feel of the rest of the record.

As expected from a disciple of Steve Coleman and the M-Base school of rhythmically complex jazz composing, Gilmore's music moves effortlessly through shifty polyrhythms and syncopations, including the title track, "Paradigm Shift," and "Event Horizon." As soloists step out from the band, the remaining musicians keep twisting rhythmic ideas in the background. In addition to hypnotic syncopations, most of the songs still retain a head-bobbing groove through melodic heads usually played on guitar, or guitar doubled by piano. Gilmore has marked skill in composing with odd meters and syncopations. Only the sinister ostinato figure in the horn section in "Elementary" diverges into more a strident rhythmic feel that sticks out from the overall groove. Gilmore's dexterity in writing complex rhythms almost matches that of his former band leader Coleman, a master at layering polyrhythms in odd meters (for example, on the excellent Steve Coleman and Five Elements record The Tao of Mad Phat, which features Gilmore, Gene Lake, and Andy Milne). Many of Gilmore's grooves flow more smoothly than Coleman's polyrhythmic workouts, challenging the listener to follow the accessible melodies over sinuously intertwining rhythms.

According to an April 2002 update on his website, Gilmore's second solo record is due late in 2002. Fans of rhythmically complex jazz, especially those who enjoy the work of other M-Base musicians like Steve Coleman and Gary Thomas, should definitely check out Ritualism as they wait for Gilmore's second solo CD.