By Hrayr Attarian
January 25, 2018
Sign in to view read count 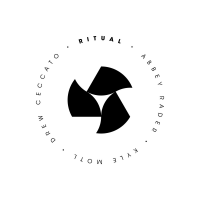 The stimulating Ritual is an energetic and intricate improvised session that drummer Abbey Rader lead on the 27th January of 2016. Although this absorbing music is free flowing and created on the spot it has a definite, fluid structure to it. The primary reason for this is the shared musical vision among Rader and his side men, bassist Kyle Motl and tenor saxophonist Drew Ceccato, both long term collaborators.

The melancholic and expectant title track, for instance, has a tense ambience that grows tauter with the increasing tempo. Ceccato's longing lines echo against Rader's rustling kit and Motl's sparse thumps as these exchanges transform into an edgy three-way conversation. The trio interplay eloquently balances lyricism and unbridled, fiery passion. After Rader's thunderous polyrhythms, Ceccato's wails and Motl's drone conclude on a contemplative note.

The angst filled "Conjurations" is a restless and moving duet that showcases Motl and Ceccato's camaraderie quite well. The former's furious bowing and the latter's flittering tenor overlap in dizzying and turbulent sonic swirls that brim with apprehensive dissonance. The piece seamlessly leads to the album's closer, the spiritual "Circles Broken"

Rader's resonant beats and Motl's pensive reverberations set the somber mood. Ceccato's mellifluous and wistful phrases pierce the rhythmic framework. As three contrasting and complementary instrumental monologues merge they crash like waves over one another. The result is full of earthy passion, emotive intelligence and ethereal spontaneity. Intriguingly it brings the performance conceptually back to "Circles Drawn" the recording's opener.

Equally solemn and dramatic is "Interiority." Rader's tolling percussion together with Ceccato's mournful tones and Motl's rich and plaintive chant-like con-arco bass conjure images of dark pastoral scenes. The tune is imbued by a primal spirituality that persists even after it becomes exhilaratingly riotous.

Simultaneously introspective and vibrant Ritual is another successful Rader effort. As with most of his work this disc is intellectually provocative with a poignant visceral impact. It makes for a very satisfying listening experience.