BY DAN BILAWSKY
December 1, 2016
Sign in to view read count 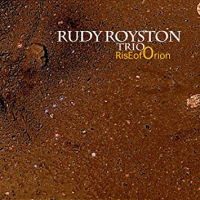 303 (Greenleaf Music, 2014) was the debut we were waiting for from drummer extraordinaire Rudy Royston, but it wasn't necessarily the debut we were expecting. Instead of playing the chops-and-brawn card that he always holds somewhere in his hand, Royston took a more thoughtful approach. He wowed with multidimensional maneuvers instead of brute force, using a uniquely patterned septet to good advantage. This follow-up date is more in line with the expectations that were defied on 303, but it's hardly predictable or one-dimensional.

For his sophomore date, Royston trims back the personnel, leaving only a "chord-less" trio with saxophonist Jon Irabagon and bassist Yasushi Nakamura to carry the load. And carry it these three do. This trio is a sinewy beast, quick on its feet and mercurial in its mannerisms. The highs it produces are impossibly high, with outré antics ("Kolbe War") and edgy rhythmic thrust ("Rise Orion") serving as the manifestation of manic intensity; and the lows come in more lyrical shapes, as Irabagon deals in simmering seduction ("Sister Mother Clara") and lullaby-like designs ("Make A Smile For Me"). There are times when a blind listen might actually point toward the saxophonist as the leader ("Dido's Lament," "We Had It All"), but the record as a whole marks Royston as the man in charge.

The energy packed into these performances is undeniable, but Royston and company don't put undue focus on power. It's the result—a byproduct, if you will—of a distinctive artistic synergy born out of the contact between these three musicians. Their connective thoughts are almost palpable, evident in their banter during post-bop forays, their constant groove calibrations, and their melodious side trips. This is a format that allows Royston to think bigger and smaller all at once, removing impediments and obstacles to change while telescoping focus in design and delivery. Royston revels in the opportunity to create with this trio, and it's a joy to bear witness to it.

Rise Of Orion; Nautical; Alnitak; Sister Mother Clara; Man O To; Alnilam; Make A Smile For Me; Kolbe War; River Styx; Dido's Lament; Mintaka; We Had It All; Belt.