By Mike Jacobs
December 1, 2016
Sign in to view read count 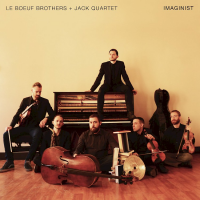 If one were to reference the Le Boeuf Brothers previous recordings for what to expect from their latest effort with the JACK Quartet, Imaginist, they might indeed find a pattern of fine musicianship and compositional ability that would not mislead. But clear evidence would also be shown of the Le Boeuf's tendencies toward eclecticism and unpredictability. These clues would also not mislead but would be of little help, specifically. And if one were to look to some of the many recent collaborations / integrations by other jazz artists with string sections, quartets or orchestras -(projects by Snarky Puppy, Bill Laurance or the many collaborative efforts by the Metropole Orchestra come to mind) -they too would be inadequate preparation for the music presented here.

What sets Imaginist apart, both from the Brothers' previous catalog -(they featured The Myth String Quartet on 2011's In Praise of Shadows) -and from other artist's orchestral collaborations, is that it puts forth a nearly unclassifiable amalgam. This is not merely "Jazz with Strings" or "Classical Compositions for Orchestra and Jazz Ensemble." This is an integration of a string quartet and classical approach to their jazz sound and sensibility that is so encompassing, it creates something generically unique from those components. This is testament to the flexibility and vision of not only the Le Boeufs and their group, but of the JACK as well, as their role in the proceedings is often nothing like that of a conventional string quartet.

There are times when jazz flavors hold sway over classical ones, and vice versa, but they are more often Yin and Yang to a wholly different stylistic abstraction. So different in fact, that it may require several passes to acclimate to the environs created here -but that doesn't keep the Le Boeuf Brothers from upping the ante.

To the musical centerpiece of the album, a six-part suite entitled "A Dream," they incorporate a spoken-word narrative (from the Kafka short story of the same name). For some classical listeners, this may evoke Copland's "Lincoln Portrait" or even Prokofiev's "Peter and the Wolf," but the choice of Kafka with the LeBoeuf/JACK hybrid underlying it is undeniably bold and at times, even unsettling. There are undoubtedly those who will initially be put off this -those who would perhaps wish there to be music, sans narration. But discovering the delicate acrobatic synergy between the two might eventually quell those wishes. These tracks on Imaginist show that the act of fusing music to a text, done well, is not merely an arbitrary pairing of compatibility, but act of compositional vision and dynamic reactivity.

The very presence of "A Dream" -with it's reframing of the music's role in the listener's mind -also may help to cause a perceptual shift with subsequent plays of the album. One that brings into greater relief the Le Boeuf's unspoken, intuitive narratives that run through the album's other tracks. The scattershot urgency of "Alkaline" and the foreboding ambiance / driving minimalism of the two-part "Exquisite Corpse" cease to insinuate music alone. In this and other ways, the collected tracks seem to resonate off one another and provide mutual relevance.

Indeed, much to the possible dismay of today's rampant shuffle / playlist mentality, this is an album that virtually demands to be listened to in context, in sequence and in it's entirety. Of course, the naming of the first and last tracks -("Prologue" and "Epilogue," respectively) -might give the first clue to this, but beyond that, (with the possible exception of the fairly self-contained "Pretenders"), there are no tracks on the album that wouldn't suffer from isolation. Imaginist's many charms seem best comprehended in its own microcosm, on its own terms.

That said, the Le Boeuf Brothers don't make it easy -nor should they. It is clear that in this collaboration with the JACK Quartet, they have striven to forge something bold and innovative with their collective talents and arguably have succeeded. For many, Imaginist may be a challenging road to appreciation, but real art should never be easy and, as in this case, greater challenges do yield deeper rewards.