By Mark Corroto
December 25, 2008
Sign in to view read count 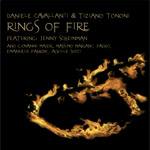 Poet Robert Browning may not have written the line, "a man's reach should exceed his grasp" with musicians Daniele Cavallanti and Tiziano Tononi in mind. But if he were to listen to some of their music, he might just have added, "and sometimes, they get a hold of something special out there."

Rings Of Fire, a two-part suite, follows the duo's longtime collaborative efforts, which include time in the Italian Instabile Orchestra and on the discs Awake Nu / A Tribute to Don Cherry (Splasc(h), 1997), We Did It, We Did It! (Rahsaan & the None) (Splasc(h), 2000) and Peace Warriors (Black Saint, 2005). They are all sprawling, multidimensional works that reflect the artists dedication to create something larger (much larger) than themselves.

This work was commissioned by Long Song's Fabrizio Perissinotto and is comprised of two suites—"Faces," written by Cavallanti, and "Phases" by Tononi. Each utilizes an octet (or double quartet) of two-horns and two-strings. In this case American violinist Jenny Scheinman and Emanuele Parrini's viola, plus Cavallanti and Achille Succi on reeds. The group is rounded out by Tononi's drums and percussionist Pacho, plus the extraordinary electric guitar work of Massimo Moriani and bassist Giovanni Maier.

"Faces," is dedicated to film directors and is as varying as each name suggests—"Cassavetes," "Bertolucci," "Jarmusch," "Wenders" and "Eastwood." Cavallanti loves to mix chamber music with rock influences, the blues, and a bit of Americana (for the westerns). Scheinman is instantly recognizable, playing with strength and confidence, sharing the string parts with viola and electric guitar. When she squares off with Cavallanti on "Eastwood," the juxtaposition of his large tone and her snap at the strings makes for a smoky groove.

Tiziano Tononi's "Phases" suite was written for nature and natural occurrences. From the thunderous opening, the octet plays an ethnic/folk music with "Motionary Tales" that injects a jazz element. Like Cavallanti, Tononi is inspired to separate the horns from the strings and make each advance towards each other from their disparate sides. By the time the band gets to the fury of the last track, they have built a complex orchestrated tempest of sound that threatens to split open, but somehow maintains its lofty ambitions.