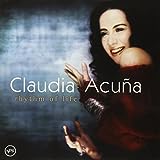 Claudia Acuña dedicates her sophomore effort to her friend and mentor Dianne Reeves, and indeed, there’s a certain Reevesian drama to Rhythm of Life. Whereas Acuña’s debut was driven mainly by pals Jason Lindner and Avishai Cohen, the new record features a broader cast of characters, including the perfect-10 rhythm team of Dave Holland and Jeff "Tain" Watts. Lindner is still quite present, however, playing piano and penning five of the nine arrangements (four of the five collaboratively with Acuña). But Acuña co-produced the disc with pianist/arranger Billy Childs, one of Reeves’s chief musical partners. It is Childs’s piano, and arrangements, that we hear on four cuts, including an ethereal 6/4 reading of "A Child Is Born" and a lush string quartet treatment of "I Fall in Love Too Easily." Avi Leibovich, a major presence on Wind From the South, is less prominent here, but his flute textures fill out "Nature Boy" beautifully. (The ending vamp is a tad overblown, with background vocalists repeatedly blurting out "There was a boy!")

Acuña’s voice is strong and versatile, generating excitement and bountiful passion. In addition to her inventive way with standards ("My Romance," a fast and highly irreverent "More Than You Know"), she excels again with Spanish-language material. Violeta Parra, the author of "Gracias a la Vida" from the previous record, is again represented with "Volver a los Diecisiete," which soars, as do Milton Nascimento’s "Maria Maria" and Pedro Luis Ferrer’s "Ay Mariposa." And last but not least, Acuña weighs in with an original bossa-ballad, the beautiful "Nowhere to Go."

While the big production serves Acuña’s voice well, it’s always wonderful to hear her interact with a small band live. Her just-announced U.S. tour, which includes a week-long run at New York’s Iridium beginning April 16, will feature Lindner, Reid Anderson on bass, and Clarence Penn on drums. In all likelihood, the bandstand is where this material will really take flight.