By Glenn Astarita
November 2, 2007
Sign in to view read count 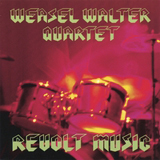 The title of this album could also sound something like the soundtrack for a toppled government. It's musical anarchy and upheaval, thanks to free-jazz drummer Weasel Walter's relentless pursuit of artistic expressionism. With alternating line-ups, recorded at a studio and venues on the West Coast, this album is about pounding bass lines, punishing rhythmic exercises, wailing saxophones and more. There are no hard-and-fast rules set forth, as the musicians' manifesto is built upon sheer energy and frenetic dialogs.

Walter's inventive polyrhythmic solo spot, during the aptly titled "Drum Solo," is a tour de force. Here, the artist performs at a rather maniacal pace, which includes his use of small percussion instruments, blitzing tom-tom patterns and incredibly fast bass-drum footwork. On various tracks two bassists provide a bottom-heavy and limber foundation for the soloists' free-flight. Even hardcore free jazz aficionados might find themselves somewhat aghast by the sheer power generated during the entire program. At the very least, Walter and associates could probably provide backup for your local energy company. Not for the feint of heart.

Revolt; Revolt and Revolt Again; Revolting Music; Totally Revolting; Drum Solo; The Need to Revolt; Right Now We Are Revolting; We Have Revolted.