Home » Jazz Articles » Monterey Jazz Festival 2021: Returning to the Scene of the Legacy 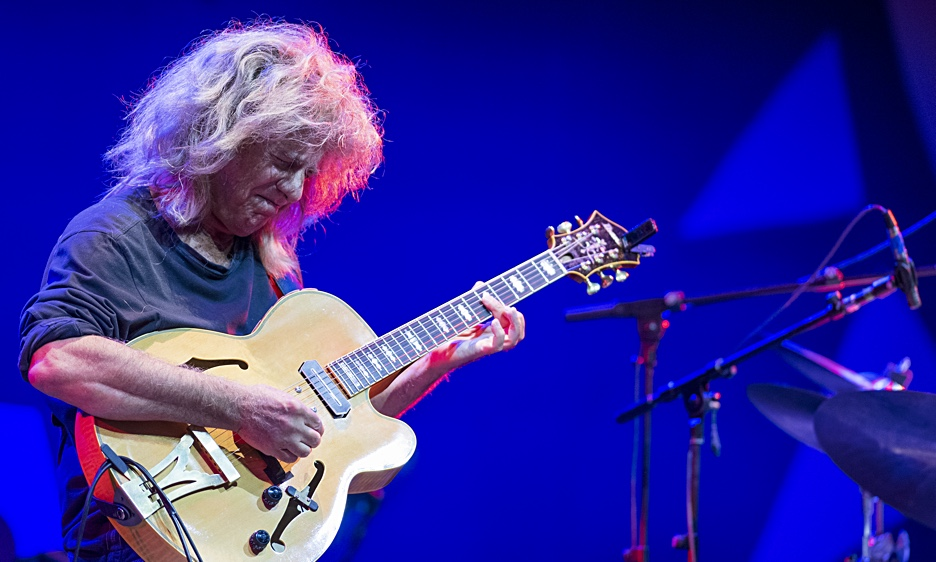 By Josef Woodard
October 4, 2021
Sign in to view read count

After losing a year to COVID’s live music-slashing sword, this great American institution—which rightly touts its legacy as the world's oldest continuous jazz festival—reconfirmed its cultural commitment, to inspiring ends.

Hastily and heroically assembled, the 64th annual Monterey Jazz Festival took over the Monterey County Fairgrounds, with an added, unusual emotional power. After losing a year to COVID's live music-slashing sword, this great American institution—which rightly touts its legacy as the world's oldest continuous jazz festival—reconfirmed its cultural commitment, to inspiring ends. The comeback package including the Marquee magnetism of Herbie Hancock, Terri Lyne Carrington's commanding Social Science project, Ledisi and the shameless crowd-pleaser George Benson closing with a "party mode" set, along with a stunning performance and new commission work by the international big band sensation Miho Hazama—ultimately the star of this fest.

As marketing director Timothy Orr said before the weekend's festivities, "we had four months to put together what normally takes 12 months." Even in its necessarily diminished capacity, with a severely limited headcount and a stern fence (seeming like a metaphor for our current reality) closing off three of the usual venues, the festival still offered plenty of musical substance to chew on for the weekend.

In lieu of what is typically a rich programming vein in rooms beyond the main arena, three worthy acts bravely presented multi-set gigs on a small stage by the fairground entrance. Dubbed the Courtyard Stage, the theme park-ish setting with a watery moat separating artists from audience made it seem like "jazz Island." The "island's" program proved a formidable sidebar unto itself, featuring the versatile and underrated mainstream guitarist Mimi Fox and trio, the stellar young trumpeter Giveton Gelin, and the inspirational young powerhouse, alto saxophonist-composer of note Immanuel Wilkins Wilkins, whose Blue Note debut Omega was one of last year's finest albums, warrants attention as one of this festival's secret sauce stars in the margins. Apart from his own quartet's burning sets on the "island," Wilkins put in memorable arena stage cameos with Kandace Springs, the all-star high school-based Next Generation Jazz Orchestra (of which Wilkins is an alumnus) and the Gerald Clayton Experience. In short, Wilkins was a Zelig-like chameleon, up to any task or sub-idiom he found himself thrown into.

This year's edition, as designed by veteran artistic director Tim Jackson, was especially inclusive. In 2019, the festival responded to the #Me Too atmosphere by accentuating women in jazz, and this year, nudged partly by Black Lives Matter awareness, the only white male headliner was Metheny— and his new Side-Eye trio features two bold black musicians, multi-keyboard mastering James Francis and dynamo drummer Joe Dyson, supplying some R&B-ish kick that we haven't heard from past Metheny aggregates.

Several artists on the program have previously graced smaller Monterey stages, and were hereby upgraded to arena status, by virtue of their currently higher profile. Two of these—Kandace Spring and now Grammy-owning Ledisi—were potent and soulful vocalists, who share a debt and a studied love of Nina Simone.

The award for vocalist-deserving-wider recognition at the festival must go to the limber and controlled Debo Ray, whose enthralling work handing sometimes serpentine material with sensual ease with Carrington's music seized our attentions. Carrington's 2019 album Waiting Game (Motéma), a deftly-blended statement of social commentary and musical adventuring, was the source of the set, embodying the symbiotic possibilities of socio-musical awareness, when handled this intelligently.

On the keyboard front, Gerald Clayton is a Monterey stalwart appearing here as suit-donning director of The Next Generation band and also saving the day, as a last-minute sub for Los Cafeteras, who had to cancel because of positive covid status problems. Clayton quickly got on the horn and assembled a quartet called the Gerald Clayton Experience (reminding us that Jimi Hendrix played on this very stage a half century ago, at the Monterey Pop Festival). The Experience included the ever-impressive drummer Eric Harland, guitarist Matthew Stevens (also in Carrington's band) and Wilkins, for a set which began in throw-together throwdown style, but later moved into more structured Clayton originals. Another Monterey returnee, Christian Sands, is a still-young but well-established pianist whose past visits here included a role in the Erroll Garner tribute fostered by the late Geri Allen. As heard in his cameo spot with the Next Generation and in his own trio's set on Sunday, Sands is an uncommonly tasteful and flexible player, virtuosic but blessed with melodicism and restraint, and even venturing into the realm of the free-ranging "outside" elements, if briefly. (He is, like Clayton, an avid educator who shared his set time with three talented high school-aged players from the Next Generation gang, tenor saxophonist Zeb J-A, trombonist Brandon Suarez and the especially impressive trumpeter Skylar Tang.

Hazama, whose star is fast rising as a big band/large ensemble leader-composer of great expressive power and creative ideas, showed up to open Saturday afternoon's program, equipped with her group known as the m-unit, a fruitful mix of compact (and gifted, to a person) big band plus string quartet for chamber-ish timbral cred. Highlighting the set was her new three-part "Exoplanet Suite," one of the best Monterey festival commissioned pieces in memory, and the unofficial "theme song" of Monterey 2021. Here, as in her other work, Hazama manages to be satisfyingly complex and brain-engaging, without losing the connection to visceral and sensual qualities. Hazama has found personal pathways between head and heart, worth keeping close track of. Select moments in the reduced but full sweep of the program stand out, and with timely resonances attached. At the tail of Hancock's Friday night set (featuring another Monterey veteran, the wowing and ascendant flutist/vocalist Elena Pinderhughes), the friendly legend followed a carefully-worked and often structurally complex set with the show's simplest bon bon as an encore, a straight version of his hit "Chameleon." Those of us who have played the tune at too many weddings may have a musty impression of the two-chord wonder.

As Hancock dove into a solo on his strapped-on Clavitar "keytar," roaming at the lip of the stage, people began to magnetically move towards the stage, with a growing population of dancers in action—a very rare sight here, given the festival's normally strict security enforcement. (The surprising dance factor occurred later in the festival, especially during Ledisi and Benson's sets). Hancock, always eager to tend his connection with listeners, palpably fed off the intimate artist-audience feedback loop we'd been denied for so many months, playing an extended hot, and ever-knottier solo that added up to a cathartic collective shiver in which musicians and music-lovers danced in spirit again, finally.

By contrast, towards the festival's finale, Wilkins held forth on "jazz island" with his almost ascetic chant of a tune, a solemn 18-note theme repeated for what seemed like 15 minutes, without solos or much dynamic variation. Some bewildered listeners drifted away to seek out the BBQ or ice cream vendors. Others were held in a contemplative thrall by this surprisingly mystical, hypnotic musical force. In a festival program without its usual balancing doses of avant-garde programming on smaller stages, this was the most radical piece of the weekend, and it felt like both a requiem for those lost and an unsentimental affirmation of leaning into a better future. That post-pandemic future has not quite arrived, of course, but at least intrepid operations like the renewed and inspired Monterey Jazz Festival give us hope and music-lined consolation in our global lurch.