By Troy Collins
December 18, 2014
Sign in to view read count 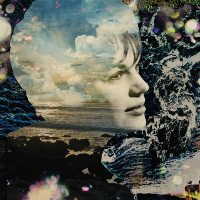 Return the Tides is a heart-felt tribute to Rob Mazurek's mother, Kathleen Mazurek, who died on May 4, 2013, just days after receiving a diagnosis of late stage cancer. Her sudden and unexpected passing motivated Mazurek to honor her generous spirit through music that would, in his words, "clear a path for my mother into the unknown to ensure her safe journey to the next."

Although currently based in Chicago, Mazurek returned to Brazil, where he lived from 2000-2008, to call upon his closest friends and associates for help with this project. In addition to his Sao Paulo Underground bandmates, keyboardist Guilherme Granado and drummer Mauricio Takara, Mazurek recruited multi-instrumentalist Thomas Rohrer, percussionist Rogério Martins and MC Rodrigo Brandão. Christened Black Cube SP, the sextet features some of São Paulo's most creative artists. Considering the destabilizing nature of its inception, this session captures their venerable rapport at its most unbridled.

Helping Mazurek "process the loss in a ritualistic, cathartic way, through sound," this tight-knit group embraced the extremely personal nature of the effort and recorded the album at a studio owned by Takara's family. Conceived as a suite and performed in one unedited take, the set seamlessly progresses through four episodic sections, each running over a quarter of an hour.

Opening with a scintillating barrage of ceremonial percussion, "Oh Mother (Angel's Wings)" builds in intensity with wistful lyricism from the leader's plangent cornet, segueing into the title track's driving polyrhythms, which inspire some of the group's most impassioned performances. Solos are brief and fleeting, with dense collective improvisations lending credence to Albert Ayler's assertion that "Music is the Healing Force of the Universe." The following number, "Let the Rain Fall Upwards," spirals skyward, roiling with backmasked loops and psychedelic efx, while the closer, "Reverse the Lightning," modulates from rapturous fanfares to a chorale of harmonized chants and hushed ruminations, symbolically signifying the safe passage of Kathleen's soul.

Where most requiems tend toward melancholic remembrances, this memorial unflinchingly embraces the totality of human experience, transposed into a dynamic electro-acoustic sound world. According to Mazurek, "the raw energy of the sound vibrations simultaneously act as a clarifying, healing source that allowed me and the other musicians to enter into the sorrow and devastation and come through to the eye of the storm ..." and in the process, symbolically work through the stages of grief, from denial to acceptance.

Supported by his empathetic sidemen, Mazurek plays with a hitherto unheard fearlessness channeled from a wellspring of emotions. Return the Tides is Mazurek's most personal and poignant offering to date; cathartic and compelling, it combines avant-garde jazz expressionism, bold electronic experimentation and hypnotic Tropicália rhythms with a profound spirituality, yielding a ritualistic homage worthy of its honoree.