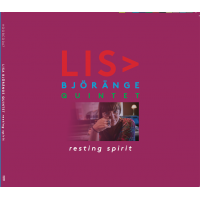 The subject matter on Swedish vocalist Lisa Björänge's third album, Resting Spirit, is heavy stuff: difficult relationships, poignant memories, and the daily struggle for personal happiness and peace. But fortunately, Björänge's top- notch quintet brings an invigorating purpose and vitality to these eight tunes, leaving one grateful for having plumbed their emotional depths, since a confident sense of triumph and resilience is the ultimate result.

On the group's previous record from 2015, Bang! (also on Hoob Records), the repertoire included several ABBA covers, so it's not a surprise to find that these musicians are willing to have some fun. Even the most emotionally weighty tracks are leavened by the group's simple joy in making such fine music. Björänge's impressive versatility plays a large role. The upbeat "Sandviken" displays her convincing upper-register scatting, while the infectious swing on the title track allows her creative phrasing to come to the fore. But she's equally compelling on the record's down-tempo tracks: "Scars" and "One Day Left" are given heartfelt treatments via Björänge's wistful, dusky delivery.

With strong melodic components and occasional inventive twists, Björänge's songwriting is sophisticated and creative: the way the group transitions through different tempos on "Never Ask for More," is crucial in tracing the song's emotional arc, moving to find hope amidst life's most daunting challenges. And "Just Wanna Be" uses a subtle tango rhythm to support one of the record's most lighthearted tracks, as Björänge reflects on the world as it looks through a child's eyes. Björänge's English lyrics are sometimes a bit awkward and unwieldy, but this generally doesn't get in the way of conveying their sentiment or the songs' musical depth.

Credit should also go to Björänge's partners, whose chemistry is undeniable. Drummer Jon Fält, pianist Fabian Kallerdahl and bassist Pär-Ola Landin make one heck of a rhythm team, with razor-sharp grooves that ooze energy and tenacity. They're given a lot of room on the record to stretch out, and they clearly relish the opportunity. Listening to the group jam on "Clouds" is a delight, especially as Fält's endlessly imaginative drumming provides punchy, off-kilter interjections in abundance. Tenor saxophonist Klas Toresson is also essential, as his ongoing dialogue with Björänge is almost telepathic as he shadows, complements, and echoes her throughout the album. But all five musicians truly work well as an integrated unit: Resting Spirit is an excellent group record, and memorable in its collaborative and emotional power.