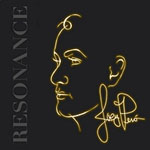 Citius, Altius, Fortius—faster, higher, stronger. That is the Olympic motto representing the philosophical and performance goals of its participating athletes. Incredible, fascinating, and tremendous are not the only the goals, but the results of phenom trumpeter Joey Pero's Resonance. This is a bravura musical performance of incredible musicianship, "virtu-artistry" and superior production values.

Pero, still in his twenties, has meteorically established himself internationally as a trumpeting force. Forged in "Upstate Burn" (a hip accolade for jazzers emanating from Upstate New York), bugle corps baptized, Julliard-trained, and Maynard Ferguson-inspired, Pero's technical abilities on the instrument are pure wizardry. He easily stands with trumpet stars such as Allen Vizzutti and Wynton Marsalis as a supreme master of the instrument in both jazz and classical disciplines, an achievement of grand (and near impossible) proportions. Yet, for his youthful presence, Pero plays with confidence and maturity far beyond his years. He doesn't let light speed technique and dog-whistle range blot the music or the presentation—he swings, too.

Resonance is an involving listen—12 selections presented in an almost moebius-strip presentation, with starts, stops, flips and turns. There are compositional and genre surprises, and hidden and cameo clichés and salutes. Multiple genres and song types are displayed from straight-ahead jazz, rock/hip hop, a world-famous commercial, to classical Bach (a revolutionary "Pero-formance" of a Bach Partita never previously performed by any instrument other than a violin). The whole here is even greater than the magnificence of its parts. Producer Charles Ressler, with arrangers Peter Fish (also co-producer)and Simon Boyar, has put together a set of selections all intertwined and presented with vitality. There's an intellectual aspect to this music but no snobbery. The variety of classical, rock, jazz and other veins established in Resonance is slick, fun and challenging listening—not for all tastes or lazy listening.

This is a showcase for chops and Pero's got 'em galore. Yet, his vast musical (and compositional) abilities are never shadowed by his awesome technique. Wailing from the depths of the horn to the stratosphere—and, seemingly beyond—Pero never lets his superhuman technical skills overshadow the music. He plays with heart. He is surrounded by a truly world-class ensemble which includes marvelous vocalists Freddy Cole, Daryl Sherman, Phoebe Snow and an array of fine musicians. All dive in and lend their considerable talents to make Resonance resonate.

The production values are excellent and rather unique (no liner notes, the black cover featuring a gilded Sinatra-esque caricature of Pero, and a black LP-style CD disc). The recording and engineering are sublime, the production elements creating an additional dimension to the disc.

Resonance invites and excites. Pero, like a winning Olympic champion athlete and his entire supporting team, get the gold medal here. It is truly a superb recording effort of class and magnificence. Maynard Ferguson, Rafael Mendez and other trumpet greats playing in the "Upper Room" would be smiling at Pero, knowing the veritable future of trumpeting is wailing away in such very solid, talented hands.