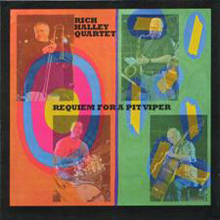 Rich Halley lists music and nature as his two greatest interests. Judging from Requiem for a Pit Viper, the saxophonist and composer is inspired by the raw power of the natural world, rather than its more peaceful gestures. This album maintains an unrelenting intensity through ten Halley originals that rarely allows a chance to stop and smell the roses.

Halley's coppery tone leaves an imprint on the air between his phrases on "Snippet Stop Warp," and his careening lines at faster tempos are forceful even without the atonal honks and haphazard runs often associated with free jazz. Outpourings such as those on the brawny, multi-strained title track never settle into recognizable patterns or even unifying motifs, though Halley comes close with some reverent postmodern preaching on "Maj."

Similarly, some of the tracks come across as catchy, composed movements alongside unfettered improvisations, rather than organic wholes combining the two. "Squeaker" keeps up a funky parade beat with trombone and squeak toy double-stops under Halley's ever-elongating phrases, but on the free-bop head "Wake Up Line" and the Coltrane-inspired theme of "Circumambulation," the reliance on contrast leaves some fascinating thematic material in limbo.

Combining a diaphanous, hard-edged tone with stuttering repetitions and guttural barks (that wouldn't be out of place in a Jazz Age territory band), trombonist Michael Vlatkovich allows ideas to linger a bit longer than his front line partner. He punches out a hummable chant on "Subterranean Strut," while "Circumambulation" features Egyptian-style swing with trombone and drums feeding Halley's frenzy.

It's clear that Rich Halley didn't hire his son Carson to play drums out of nepotism. The youngest member of the group orchestrates his beats and applies subtle gradations of texture, as shown by his buoyant Latin feel on "Afternoon in June." Bassist Clyde Reed doesn't stick out, but a stronger presence would have filled out the texture between horns and drums.

The irony of the Rich Halley Quartet's relentless contrasts and consistent high temperatures is that they blend into uniformity. Everything is front and center, so nothing really sticks out. In keeping with Halley's inspiration from nature, Requiem for a Pit Viper might be compared to white water rapids, except even rivers have some calmer sections.