John Taylor: Requiem for a Dreamer 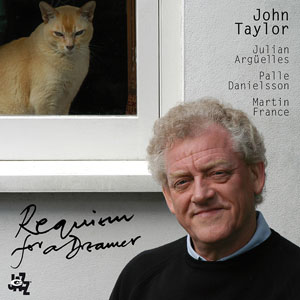 It's been three years since John Taylor's last trio disc, but this time the British pianist takes a small detour, rather than continue the winning streak of Angel of the Presence (Cam Jazz, 2006) and Whirlpool (Cam Jazz, 2008). Requiem for a Dreamer reunites Taylor with his longstanding trio—Swedish bassist Palle Danielsson and British drummer Martin France—but with the addition of saxophonist Julian Arguelles., he makes an inspired choice, capitalizing on the chemistry of the trio while adding a fourth voice who provides some fresh blood without being an entirely unknown quantity.

Taylor has long followed a general modus operandi that combines his own writing with material from longtime musical partner, trumpeter Kenny Wheeler, and others. With Requiem, Taylor breaks with tradition to deliver a set of all-new originals, inspired by the writings of Kurt Vonnegut. Beyond the titles—"Ice 9" referencing Cat's Cradle (1963), and "Unstuck in Time" and "So It Goes" to the late American satirist's seminal Slaughterhouse-Five (1969)—Taylor's inspirations remain largely internal, with the exception of the angular "Calypso 53," which draws liberally from the lyrics of "53rd Calypso," a song attributed to Cat's Cradle's Bokononism cult. Uncredited voices deliver bits of its lyrics, the "Nice, nice, very nice" refrain fitting perfectly with Taylor's 5/4 groove, driven by Danielsson's ostinato and France's second line-inspired but looser and more delicate pulse.

"Somebody I Used to Be" mirrors the harmonic language of "Calypso 53," though the rhythmic approach is different. Introduced by a lengthy opening bass solo, its smoother 6/8 pulse drives a piano/sax melody, coalescing as a lead-in to Argüelles' soprano solo, the saxophonist moving gradually into upper register cascading runs, before winding down as a setup for Taylor's characteristically motif-driven solo. Taylor's relationship with Danielsson goes back to the mid-1990s and four albums with Peter Erskine's ECM trio, and while the trio parted ways after 1999's Juni on philosophical grounds—the drummer aiming for greater simplicity as Taylor's own harmonic conception was densifying—it's clear that the pianist and bassist form an ideal partnership, the language developed along with France far surpassing his admittedly fine collaboration with bassist Marc Johnson and drummer Joey Baron on Rosslyn (ECM, 2003).

The disc is bookended by two different versions of the title track. The first opens with Taylor alone, dark-hued and spare, building into a duo with Argüelles (again, on soprano), the haunting melody reflecting Taylor's personal ability to combine spare, approachable lyricism with more abstruse leanings, bolstered by Danielsson's deep-toned, note-perfect choices locking with France's gently framing brushwork. Argüelles adopts a grittier tone on the second version with a more expressionistic tenor solo, as the rest of the group enters—France on sticks this time—for a more vivid take that still manages to wind down for a conclusive set-closer.

Taylor's records never impress with overt demonstrations. Instead, the pianist has patiently built a discography reflecting a lifelong commitment to slowly, inexorably pushing the envelope. Requiem for a Dreamer does just that, but in the quietest, most unassuming way possible; an absolutely gorgeous record where everyone shines without ever breaking a sweat.

Requiem for a Dreamer; Somebody I Used to Be; Ice 9; Unstuck in Time; So It Goes; Calypso 53; Requiem 2.