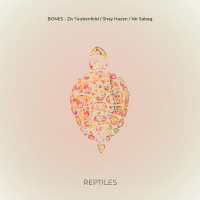 The barely-there pastel-colored turtle adorning the cover of Reptiles gives an elegant visual summary of the skeletal but attractive content inside. It's the third release from a young Israeli trio led by Amsterdam-based bass clarinetist Ziv Taubenfeld, which includes his fellow countrymen bassist Shay Hazan and drummer Nir Sabag. Recorded in November 2017 in Netherlands, the limited edition LP comprises three cuts written by the reedman, one collaborative effort, and three unaccompanied pieces named after the album title.

Taubenfeld possesses a pleasantly hoarse tone on the bass clarinet, as if suffering after one too many nights on the tiles, a feeling reinforced by the vocalized burr he sometimes adds to his softly etched lines. He shares a special bond with Hazan, whose incisive woody bass resonance often intertwines with the bottom end reed. On drums Sabag is restrained but responsive, often comfortable to merely shade the interplay around him.

Each man gets a turn alone on the three variants of the title cut, moving from grave calm to knotty flurries, leavened by emphatic thwacks in Hazan's case on "Reptiles A," slurred pitches and multiphonic hints which lead into some of his most demonstrative playing, placed amid heaps of air by the leader on "Reptiles B," and a barebones beat which transforms into a polyrhythmic tattoo on Sabag's "Reptiles C."

They carry the pared back concept through from the instrumentation into the music, leaving generous space, even when they are at their busiest, as on "Book." Here the writing isn't explicit on a track where bubbling bass clarinet joins flinty bass and lightly clattering drums in group exchange, before developing into an unhurried conversational duet with Hazan's contrapuntal picking. Elsewhere Taubenfeld's charts manifest in simple phrases, as on "Moondoctor," where he skirts lugubriously around a muscular bass riff, before a loose pulse morphs into a swinging vamp which he garrulously embroiders.

The harmonious pairing of woodwind and strings also dominates on the collective "Drops," culminating in a welter of wiry arco harmonic oscillations against gently wickering reeds. Sabag gets to press his foot to the floor on the concluding "Water." It starts with Tabuenfeld's frayed repetitions over a recycled pizzicato figure, before he waxes loquacious and excitable over the rhythmic churn, only for the energy to dissolve into raspy sawing and subdued murmuring.

It all hangs together well, and the trio's relaxed approach makes for an engaging listen.