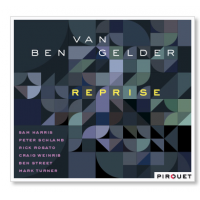 Marked by an attentive copacetic style, Ben van Gelder's sophomore release Reprise is a continuation of good music witnessed in his 2011 debut Frame of Reference . The alto saxophonist's release on Pirouet Records moves forward with an introspective and airy vibe brought via quintet of peers that's gelled into a tight unit over two years in New York.

The set is a cohesive linking of free improvisation and thoughtful composition that combine tension and release in many of the tracks as Van Gelder and pianist Sam Harris offer peaceful statements while Craig Weinrib's blossoming drum traps stoke the fire in "All Rise." The sturdy centering from bassist Rick Rosato and the frosty mallets of vibraphonist Peter Schlamb provide atmosphere to "Tribute" bringing to mind the 1960 Blue Note dates with the great Bobby Hutcherson as well as the undeniable modal influence in the tranquil "August."

Van Gelder's technical strength is undergirded with feeling and he holds is own with the great tenor saxophonist Mark Turner who guests on "Into Air It Disappears" and the memorable title track. The former is reminiscent of Ravi Coltrane's recent ideas in improvisation whereas the latter is an extraordinary work of flowing composition with Turner mystically freestyling the first half countered by Van Gelder's labyrinthine flights on the second. Another strong release from an emerging young voice.