By NENAD GEORGIEVSKI
December 5, 2016
Sign in to view read count 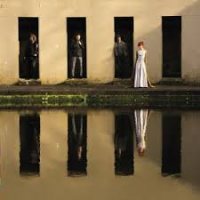 Repeater is an idiosyncratic vinyl only retrospective by the acclaimed quartet Spiro that collects highlights of the band's four albums that were recorded between 1997 and 2015.The British quartet's unrelenting passion for following its muse has served it well as the group's fearless explorations have yielded an ever-expanding audience and over the years Spiro has crisscrossed the universes of folk/world and classical music. Stretching the boundaries and crisscrossing universes is now a regular practice for a number of groups but Spiro is not an average group.

The band's music, best expressed through its albums as full statements, is often beyond categorization or even simple description. It carves its own path as the tune selection indicates the telepathic communication between the band members as they journey through this mesh of sounds. One unique aspect of this music is the new way in which the instrumentalists relate.The blend between their instruments makes it sound as if they are of one mind, yet their melodic world/folk music is open to spontaneity and surprises. From the opening "The Sky is a Blue Ball" until the closing "Burning Bridge" this represents a set of intriguing music that grows in interest with each listen. This music is an unabashed exploration of time, pulse, space, and atmosphere.

The tracks aren't assembled in a chronological manner instead opting for painting a different picture. All of the compositions here are performed with skill and artistry. Obviously, the band members are masters in turning the ordinary into something amazing and new. The energy and enthusiasm are palatable, and there's a sense of celebration that echoes throughout.

What the compilation lacks is the presence of any exclusive material and liner notes that would explain why these songs in the first place. Nevertheless, the selection paints a great portrait and fans and newcomers can revel in the enjoyable and unique work by a unique band. Overall, Spiro's signature fusion of various sounds and influences on the tracks selected here serve to marvel at the band's wizardry and evocative artistry. There is plenty of musical vision to be found in this introductory guide.

The Sky is a Blue Bowl; The Vapourer; The Darkling Plains; We Will Be Absorbed; Shaft; Yellow Noise; Welcome Joy and Welcome Sorrow; The White Hart; I Fear You Just as I Fear Ghosts; Burning Bridge.