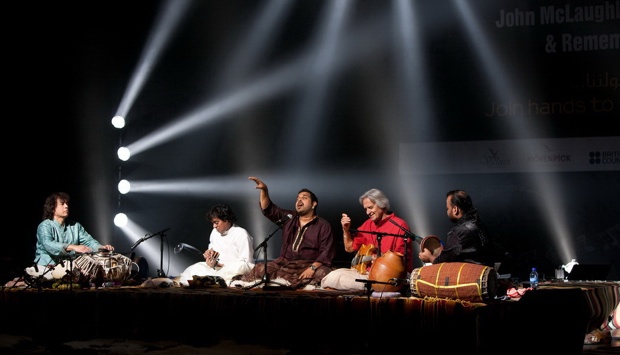 By Ian Patterson
March 7, 2012
Sign in to view read count
Remember Shakti
Ramallah Cultural Palace
Ramallah, Palestinian Territories
February 14, 2012
Who believed at the end of Remember Shakti's 2006 tour—and nine years after a twenty-year hiatus—that the legendary band would get together once again, half a dozen years later? With all the members so impossibly busy with their respective music-making, a reunion seemed unlikely. But in guitarist John McLaughlin's mind the band never went away; it had merely parked up for a while. Few would have envisaged a return to the stage with a concert in the occupied Palestinian territories. However, after several years negotiating the intricate tapestry of Middle Eastern diplomacy, Remember Shakti's triumphant concert in the Ramallah Cultural Palace proved the truth of the age-old proverb that hope really does spring eternal.

This concert was a show of solidarity with the plight of Palestinian children in the West Bank, and a fundraiser for Al Mada, a pioneering organization which uses music and art as therapy for traumatized children, and indeed anyone who feels the need to embrace music and art as a means of catharsis. The seeds of Remember Shakti's journey to Ramallah, as it turns out, had been planted years before: "I'd already heard of the work [concert pianist/conductor] Daniel Barenboim is doing in Palestine," explained McLaughlin, "and his work is the original inspiration behind my idea. He's part of the solution."

Barenboim and cultural critic Edward Said's Seville-based West-Eastern Divan orchestra have brought together Israeli, Palestinian and Arab musicians since 1999, and Barenboim has made headlines in spectacular fashion in pursuit of better understanding between Israelis and Palestinians on more than one occasion. Fearless in his convictions, Barenboim broke the long-standing taboo of playing Wagner's music in Israel in 2001, and ten years later led a clandestine orchestra of some of Europe's finest classical musicians across the Egyptian border for a performance in Gaza. He's also the only Israeli to hold honorary Palestinian citizenship, though whether this distinction now excludes him from driving on the roads reserved for Israelis/Jewish settlers in the West Bank is unclear. Inspirational indeed.

It was music that brought together seven hundred people inside the impressive Ramallah Cultural Palace. The Palestinian Prime Minister, Dr. Salam Fayyad—a progressive voice— was there to lend his support, as was senior staff from the concert's co-sponsors, UNICEF and UNRWA (The United Nations Relief and Works Agency for Palestinian Refugees), and appropriately, children from several of the territories 28 official refugees camps, who have participated in music therapy sessions with Al Mada.

Emcee Hala Turjman welcomed the audience with a poignant statement, quoted in part here: "It's not a luxury to sing and dance. We are like all peoples; free we were born, and free we will die. Like all people we have our own story. We may have come into the world by chance, but Palestinians we have always been and will always be on this land. If there's anything that can't be understood, it's to be refugees on our own land and prisoners in our own homes. We still continue to dance, to sing, to draw and to write, as our oppressors cannot see but their own shadow, and fear us..." 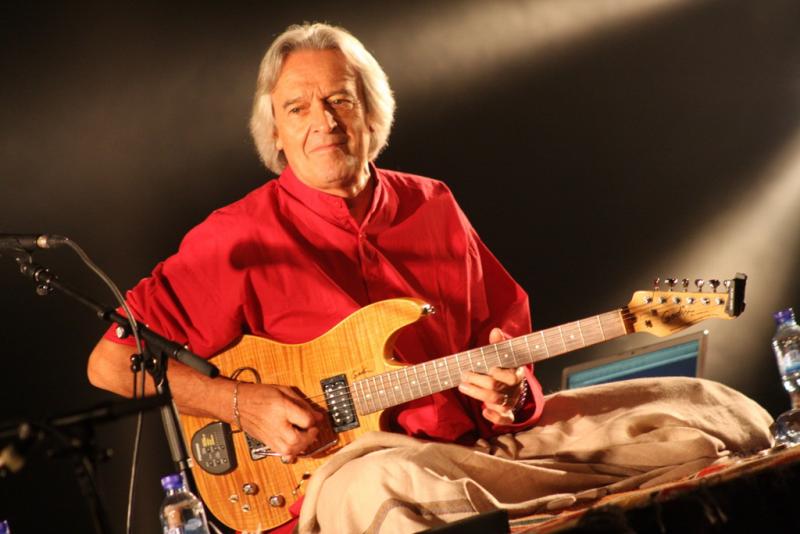 To enthusiastic applause, Remember Shakti took to the stage against the backdrop of a low sitar drone, and after a short tuning session, Zakir Hussain's gradually accelerating tabla signaled the beginning of the exhilarating "5 in the Morning, 6 in the Afternoon," with V. Selvaganesh a powerful presence on kanjira, the diminutive frame drum. The first sparks flew in charged interplay between Hussain and U. Srinivas's mandolin, and bursts of applause filled the pauses between the climactic peaks with a certain drama all of their own. McLaughlin's intervention was staccato to begin with, but he soon gathered wind in his sails, playing with the same fire as ever. Though he turned 70 in January, McLaughlin looked thirty years younger on stage, such was the energy and joy he exuded.

As breathtaking as the individual virtuosity was, equally notable was the disciplined interplay. The tightly woven unison lines between guitar and mandolin, and between tabla and ghatam, were utterly compelling on the vignette "Anna," whose conclusion after just three captivating minutes took most by surprise, particularly following the extended fireworks and pregnant pauses of the opening number.

Hussain was stating simple fact when he welcomed singer Shankar Mahadevan to the stage as "one of the finest voices you will ever hear in this world." Mahadevan's caressing vocal on the intro to "Giriraj Sudha" was a soothing balm, while his improvisation towards the songs livelier mid-section and rousing conclusion—spurred by Hussain's intensely driving tabla and Selvaganesh on equally potent mridangam—lifted the audience. Though not as explosive as the late Nusrat Fateh Ali Khan, Mahadevan's emotional delivery and improvisational strength was nevertheless evocative of the legendary Qawwali singer, particularly on the peaceful intro to Hussain's epic composition "Ma No Pa." 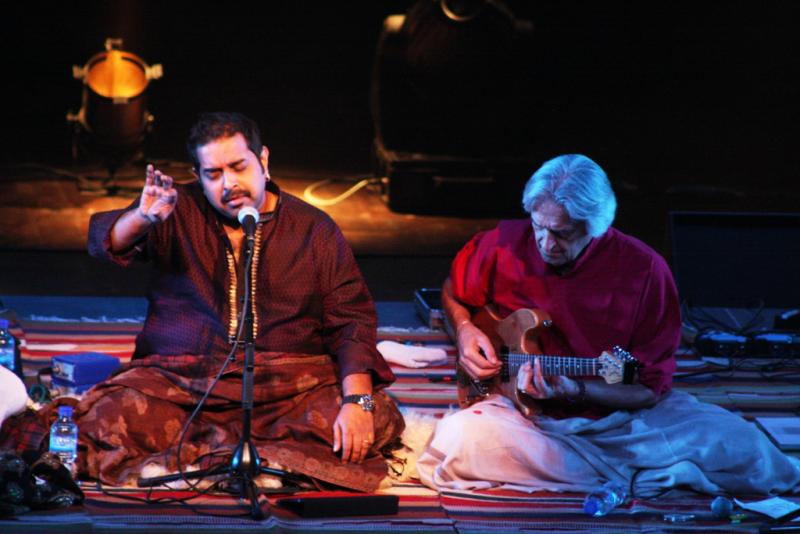 Dovetailing first with U. Srinivas and then with McLaughlin on his effects-driven, flute-toned guitar, the haunting beauty of Mahadevan's gentle delivery on the percussion-free intro also provided strong contrast to the intensity of the ensemble improvisation which followed. The joyful dialogue between McLaughlin and Hussain which redirected the song was a delight to watch, as they teased, probed and dared each other like siblings at play. McLaughlin's other-worldly intro to the Mahavishnu Orchestra's "Lila's Dance" from Visions of the Emerald Beyond (Columbia, 1975) served as a short bridge to some fast-tempo improvisation from all, with an inspired McLaughlin at the heart of the group fire. Mahadevan returned at the tail-end of the composition with rattling percussion propelling the captivating 15-minute piece to its conclusion.

A couple of new numbers were aired, suggesting that there may be a new recording in the works, perhaps to coincide with Remember Shakti's more extended tour scheduled for 2013. An untitled piece—short, but packing real punch—featured Mahadevan again, who seemed to be gracefully throwing the high notes into the air, almost as gestures of offering. Hussain explained that the number was still a work in progress, which, given its vibrancy, rather whets the appetite for more polished renditions a year from now.

Two of the oldest compositions of the set, "Bridge of Sighs" from Shakti's seminal album Natural Elements (Columbia, 1977), and the lovely "Lotus Feet" from the band's eponymous debut, Shakti (Columbia, 1976) were also the most stripped down of the evening, with melody and atmosphere trumping virtuosity, though the percussive finale on "Bridge of Sighs" was undoubtedly electrifying. 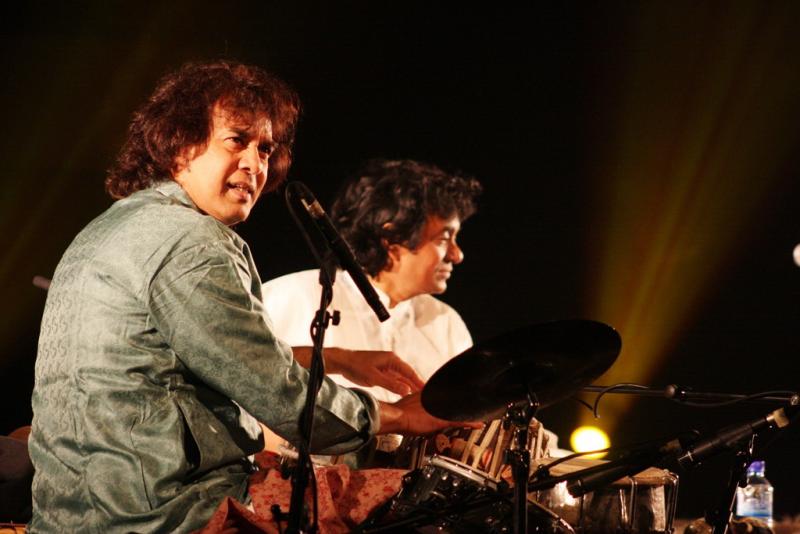 The other new composition, "Shaki," provided a highlight of the set. Beginning with a beautiful vocal-led melody and the simplest of strummed chords, the song grew magnificently. U. Srinivas and McLaughlin played at dizzying speed with tabla and kanjira in step, and after the fireworks Mahadevan's rejoined, soaring once again.

Not quite new, but certainly dressed in new robes, McLaughlin's composition "Five Peace Band" from his outstanding Floating Point (Abstract Logix, 2008) featured a blistering konnakol exchange between Hussain and V. Selvaganesh. A number of children sat to the right of the stage from various refugee camps,who had participated in Al Mada's music therapy sessions, turned to their guardians and each other in open-mouthed, smiling disbelief at this beautiful cacophony; not unlike the rest of the audience, it has to be said.

The final half hour featured Hussain and V. Selvaganesh in a percussive display of rare power and no little finesse. With the other band members marking the one with obvious delight, Hussain's thunderstorm of a solo—which included the theme from "Mission Impossible"—set a very high bar, but V. Selvaganesh responded with an astonishing improvisation on kanjira which was no less absorbing. With Hussain switching to Arabic drum, a quite thrilling dialogue ensued between the two. There was no way to top that, and McLaughlin, U. Srinivas and Mahadevan returned merely to carry the piece home in one final, blistering climax.

The two-hour performance was greeted with a standing ovation, and in a final touching gesture, children from the Palestinian refugee camps presented the musicians on stage with mementos of a unique event. Joy and honest communication were the watchwords of this concert. It is precisely this that Al Mada seeks to bring to the Palestinian children and adults in its music therapy programs. Al Mada understands the transformative power of music to heal and to empower, and so too humanitarians like Daniel Barenboim and John McLaughlin.

For any musicians interested in assisting Al Mada or for anyone wishing simply to support its work, more information can be found at Al Mada.