BY BRUCE LINDSAY
January 7, 2014
Sign in to view read count 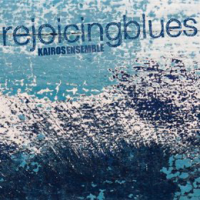 Kairos Ensemble (not to be confused with another UK four piece, Kairos 4tet) came together in 2001. Rejoicing Blues is the ensemble's fifth album and features tunes from the band's live sets that have not previously been recorded. There is, indeed, much here that is worth rejoicing.

The ensemble features saxophonist Dan Foster, pianist Peter James and drummer Tom Hooper. In a slightly-out-of-leftfield move the Kairos Ensemble's bottom end rhythm duties are handled not by the traditional double bass, but by Richard Fox's probably even more traditional tuba. Whether this choice of instrument was a musical decision or a more pragmatic one is unclear, but the end result is a constant joy. Fox's sense of rhythm is spot-on and he has the ability to shift between the tuba's fruitier tones and much softer, more romantic sounds. On occasion he coaxes more than passable double bass and bass guitar impressions from the instrument as well, enriching the music with this variety of tones and colors.

With one exception, the traditional folk tune "The Water Is Wide," the music on Rejoicing Blues is written by James, Fox or Foster. Hooper receives no composer credit, but Foster's funky "Mr Tom" is dedicated to the drummer and gives him plenty of space to stretch out. Much of the music is underpinned by a strong spiritual foundation—particularly apparent in "Underground (For The Saints)" and "The Water Is Wide."

Three tunes have a somewhat reflective and melancholy air. "The Water Is Wide" is dedicated to Foster's late mother, Joan, and showcases his lyrical alto playing. Fox's "Lost Property"—a lament for his brother Graham—is a beautiful number which features Foster's tenor and a languid, emotive tuba solo from Fox. The band describes James' "Underground (For The Saints)" as a prayer for those suffering religious persecution. It's a prayer with a very contemporary sound, thanks to James' keyboards and the insistent, hand-clapped and foot-stamped, beat.

The rest of the tunes share a more upbeat and celebratory mood—along with some absolutely irresistible dance grooves. Fox's "Curiosity" and James' "African Skies" wear their inspirations openly—and why not, when those inspirations are Astor Piazzolla and Abdullah Ibrahim? The inspiration behind the funky "Spider" is less easy to spot—maybe James, the composer, is an arachnophile? "In Step," say the band, celebrates the "joy of walking in step with the Spirit of God." It also seems to be marvellously in step with the spirit and slinky groove of Charlie Parker's "My Little Suede Shoes"—there's a brief but enjoyable tuba and drum duet thrown in for good measure.

Whatever the inspirations may have been, the results are a delight. A collection of beautifully-played, inventive and vibrant tunes, Rejoicing Blues is itself an inspiration.