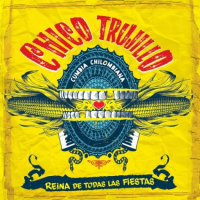 As the late 1990s transitioned into the early 2000s, in the small Chilean town called Villa Aleman, singer Aldo "Macha" Asenjo and other members of the local punk-ska group LaFloripondio would gather around and jam for fun on old classics from the Chilean and Columbian cumbia traditions. After fifteen years, six albums, and a few world tours together as Chico Trujillo, the band remains true to these roots: Their newest title, Reina de Todas Las Fiestas, translates as The Queen of All Parties.

Recorded across Argentina, Chile, Columbia, and Mexico, Las Fiestas captures a colorful, warm and celebratory sound—as if Chico Trujillo threw and recorded an outdoor party featuring cumbia, mariachi, marching and New Orleans brass bands, all randomly strolling in and out of the celebration. Several tunes, such as the bandeon-based "Se Nota En El Ambiente Que Tenemos Que Partir" and flute-fueled "Alturas," whip up the feeling of a twirling, traditional dance you might enjoy at an ethnic wedding celebration.

But Las Fiestas saves its ultimate celebration for the closing, title track recorded with Banda Wiracocha, a 30-piece brass band from Northern Chile which specializes in pre-Hispanic songs, dances, and ritual and carnival music. This joint performance captures a wild and raucous celebration of their shared South American musical culture, and doesn't shut Las Fiestas down as much as it blows it up and out.