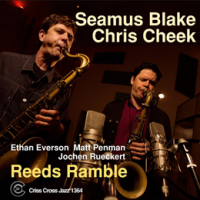 As leader of the 1995 funky, alternative/electronic music group The Bloomdaddies, saxophonist Seamus Blake released the band's debut album Bloomdaddies (Criss Cross 1110, 1996) that included fellow reed man Chris Cheek among the personnel. Twenty-years later, after forging independent careers as sidemen, big band soloists and leaders of their own groups, on Reeds Ramble, Blake and Cheek reunite once again in a jazz outing that lays down 'their' version of the oft used term "tenor madness." There's a slight double entendre with the title of the album which, not only refers to the obvious rambling saxophone play from both co-leaders but, actually is attributed to a Jerry Reed tune popularized by country guitarist Chet Atkins.

Leading off this special occasion is the melodic "Na Carreira," a Cheek selection from Brazilian composer Chico Buarque where the duo (Blake on the left and Cheek on the right channel) immediately showcase their talents featuring pianist Ethan Iverson and cymbal accents from drummer Jochen Rueckert. Way on the other side of the jazz spectrum, the group turns in a perky rendition of the Eddie Harris piece "1974 Blues" offering both co-leaders with high-energy solo spots. Pianist Jim Beard's composition "Holodeck Waltz" featured the great Wayne Shorter on soprano in a 1990 recording and on this rendition, is reprised by Cheek on soprano.

On the first of only two originals, Cheek's "Blue Moose" begins with an almost New Orleans-styled opening but develops quite nicely with the predictable tenor leads ably supported by a distinctive and cohesive rhythm section. The following "De Dah" features illuminates more from the same with bassist Matt Penman coming to the fore on a fine solo. The balladic piece of the album goes to the delicate "I Surrender Dear" offering tender phrases from the sax men while, in stark contrast, "All About Me," the other original tune, this time from Blake, possess a bebop flavor presenting solos from each member of the band.

The album concludes with a nod to modern jazz with the spacious "Lady in Languor" from fellow Canadian (Blake is from Canada) composer Vickie Yang offering non-standard harmonies in an otherwise, primarily traditional jazz setting. Teaming up once again after so many years, Seamus Blake and Chris Cheek make the wait well worth it on Reeds Ramble, a saxophone-infused session of jazz from two veteran masters of their instruments that complement each other quite well here.

Na Carreira; 1974 Blues; Holodeck Waltz; Blue Moose; De Dah; 'Til I Die; I Surrender Dear; All About Me; Lady In Languor.