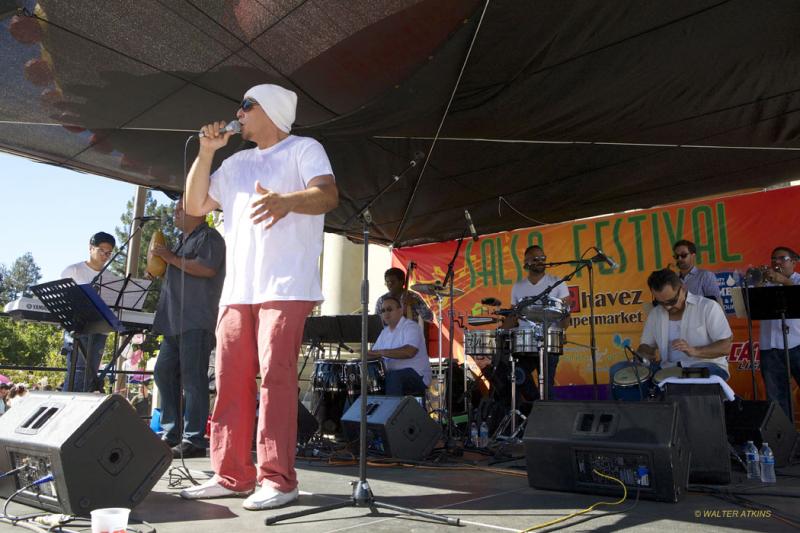 BY WALTER ATKINS
September 29, 2016
Sign in to view read count

By mid day, the entire square was undulating to the pulsating Cuban/Tropical beat of this ten piece band (Orquesta Bembé).
—Walter Atkins

Cuban born songwriter and sonero Reinoso, now based in the Bay Area, kicked off the rhythmic salsa sounds in the historic Courthouse Square. People were elated and dancing with the opening notes of Reinoso and company. Fast rising Orquesta Bembé (Fiesta) followed two hours later and continued the groove. By mid day, the entire square was undulating to the pulsating Cuban/Tropical beat of this ten piece band that formed in 2013. Xavier's set featured his smooth R&B infused vocals richly supported by strong Latin rhythms.

Native Elements, another ten piece band that started in the Bay Area, was holding court at the Reggae Stage. A RCSF favorite, the group evoked the positive vibes of Bob Marley and other reggae superstars. One listener commented the festival was one of the "best summer events," and he loved the, "variety of music." Living nearby, he decided to come out to get closer to the music. Over at the Latin Jazz Stage, international vocalist Parra performed and was followed by the Cabanijazz Project. Celebrated Richmond CA guitarist Ray Obiedo & The Urban Latin Jazz Project closed out the spot with his soulful, bluesy blend of Latin jazz. During a screaming horn solo, a supporter commented, "He's getting funky—the horn player is digging in." The group's caliente hot arrangement of "El Pito" (I'll Never Go Back To Georgia) stood out with danceable vigor. The popular Afro Cuban chat references Dizzy Gillespie's vocal intro to "Manteca." Patrons were having big fun dancing in front of the small stage as they filled the street. The late afternoon sun completely bathed the exuberant audience.

Stage manager Matt Beasley, band leader Brian Andres and other musicians liked how the RCSF did a lot of little things well. They appreciated parking directly behind the stage and unloading equipment for easy setup. Obiedo's drummer talked about a city gig where he parked so far away, he needed a cab to return to the venue. He also preferred the intimacy of the compact Latin Jazz Stage.

2016's edition of the Redwood City Salsa Festival is a family-friendly event that had something fun, cultural, and entertaining for everyone. With easy public access along with free parking, the annual mid peninsula event is a sensational way to close out the summer in the San Francisco Bay Area.