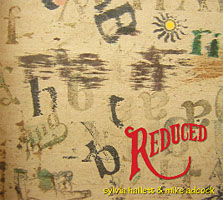 The Spontaneous Music Ensemble lineup of drummer/cornetist John Stevens and soprano saxophonist Trevor Watts can, for countless reasons, serve as the template against which many another freely improvising duo can be gauged. That's an especially pertinent point with Reduced, as multi-instrumentalists Sylvia Hallett and Mike Adcock have fashioned a dialog every bit as rarefied as the one that Stevens and Watts created. Not even the highly residual influence of late period John Coltrane—that was, by a stretch of the imagination, detectable in that ensemble's work—comes through here. The results are extraordinary.

The presence of the accordion underlines that point, in no small part. The cryptically titled "Strange Power! I trust they might" finds the instrument rearing out of a swell of noise—not so much white as mid-grey—simultaneously soothing yet shot through with palpable unease. If this was music of the sea, then the water would be teeming with marine life beyond imagining.

"Notched like harps" is music for a story yet to be written, but this duo's imagination is such that they'll probably write it sooner or later. Adcock's guitar playing has a kind of folksy edge, which inspires thoughts of country folk enthralled to age-old customs, the like of which have no longer have a place in the "civilized" world, while Hallett conjures approximations of whale songs from her violin.

"Try turning it upside down" might well be very practical advice, but in music like this practicality is probably the last thing needed. Again, there's a folksy quality, this time via Hallett's violin, but as much as anything else this is not music so easily nailed. Being quite unlike anything else—even some of the rest of the program—ensures that the music has to be dealt with on its own terms, and that could involve a considerable mental workout in itself.

"We drank in great houses" is as private as anything, music the likes of which might seem almost voyeuristic. That privilege, however, yields singular dividends in the approximate forms of clangorous strings and dead sounds. As ever, the resulting dialog is animated—its motives veiled—with the close of the piece coming arbitrarily.

"Shudder to think" doesn't so much close things out as offer a last thought before the closing of figurative doors. The next chapter—if indeed there is one—can only be something else again.

Gewgaws; Leaning on a lamprey; From across the tracks; Strange Power! I trust thy might; Only tulle; Notched like harps; Betty Martin; Silent is the house; Try turning it upside down; We drank in great houses; Shudder to think.