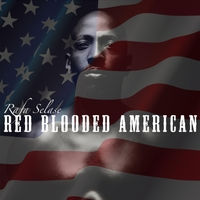 Powerful lyrics and seamless melodies with a timeless feel define the new album from Rafa Selase, which bridges the gaps between folk, hip-hop, and jazz. It also echoes the pioneering spoken-word music of Gil Scott-Heron in its real and vivid poetry. As one can interpret from the title, Selase reflects on the social and political environment of living in America now. If Public Enemy was the CNN of inner cities, Selase is its literary observer. The songs on Red Blooded American are accessible but not compromised towards commercial goals; nothing is watered down. "Part of what makes the disc so wildly amazing is the freedom to be as quirky, intelligent, crazy and artistic as you want," Selase stated. That independent spirit is captured in every lyric and beat.

Selase is a talented artist, and his music is so much more than plain entertainment. In fact, Selase is a bona fide storyteller, whose powerful lyrics and heartfelt influences are poignant and easy to relate to. His work is rooted deeply within the tradition of folk, but his compositions also feature elements of alternative and more.

Red Blooded American is a compelling display of passion and artistry. Featuring seven songs, including the stunning title track, that serves as the flagship track of this record with its iconic lyrics and indelible hooks. "Chasing Demons" is another mesmerizing song, and it stands out as a personal favorite, particularly due to its lush textures and to Selase's ability to come up with witty, personal lyrics that the audience can seamlessly connect with.