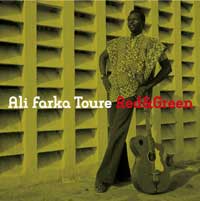 Much has been said about the West African origins of the blues, but the only real concensus is that the music of Mali, particularly from the north, sounds remarkably similar to early African American forms that emerged first in the Mississippi Delta, then later in Chicago and beyond. This information comes as no surprise to the elder statesman of Malian blues, Ali Farka Toure, who has been rather outspoken in his assertion that American artists have borrowed from his music, not vice versa. More likely, though, both are actually branches off the same evolutionary tree.

Toure first attracted widespread attention in the US when Ry Cooder (of Buena Vista Social Club fame) approached him to make Talking Timbuktu (Hannibal, 1994), a potent statement that won a Grammy and rode atop the Billboard world music charts longer than any album in history. Listeners have since been spurred on to explore Toure's roots on discs like Radio Mali (World Circuit/Nonesuch 1996) and Niafunké (Hannibal, 1999).

This reissue of Red & Green resurrects two albums made in the early '80s, offering nearly ninety minutes of vintage material, much of it consisting of Toure playing guitar and singing along with minimal percussion. This music is stunning in its stark beauty, intimacy, immediacy, and reverence. The bluesman's characteristic self confidence manifests itself as ever-steady, assured progression. These mostly mid-tempo pieces explore pentatonic melody and harmony, counterpoint appearing in the form of conversational guitar parts as well as call and response phrasing.

It's worth pointing out that the lyrics (printed in their entirety in translation from six original languages) stress the importance of friendship, love, praise, social awareness, and respect for elders and ancestors; the emphasis on shared humanity serves as both a reminder and a celebration. The trance-like character of much of this music sucks you in, provided you're willing to make the journey, and leaves you with a warm glow inside that takes some time to dissipate.

Without question two of the greatest recordings in the history of West African music, and some of the most utterly bluesy—yet overwhelmingly positive—musical experiences on the planet.