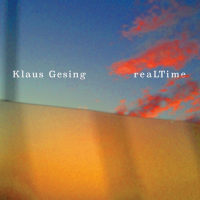 Klaus Gesing is best known stateside for his collaborations with Norma Winstone and Anouar Brahem, both documented to wide acclaim on ECM Records. The German multi-reedist's work with these honed ensembles polishes only a few of his diverse facets, which reflect his equal footing in classical and jazz training, as well as beyond. Whether in the soulfulness of Jan Garbarek or the genius of Herbie Hancock, the grandiosity of Gustav Mahler or the prodigy of Michael Jackson, he has taken inspiration from musical trendsetters across genres. Gesing's solo activities have produced a comparable node of fascination on reaLTime, wherein one may navigate the inner mazes of his craft, up close and personal. On this album, he favors the bass clarinet, which often serves as the sole means of melodic production throughout. I asked Gesing to expand on his relationship with this notorious instrument.

"After finishing my conservatory studies in The Hague/Netherlands, I focused for some years on soprano sax to get a handle on its various difficulties. The soprano's range made it possible to find a somewhat more personal approach to sound and choice of notes than, say, tenor. Another reason was the strong influence of Dave Liebman, with whom I'd studied a bit and kept in contact. But after four years of nothing but soprano, I was missing the lower range. By chance (if chance you want to call it) a friend of mine asked me if I knew somebody that wanted to buy his bass clarinet, as he didn't really use it. I dropped by his house, played the lowest note first (it was a low c model, which I am still playing) and completely fell in love with it. So I bought it and started to practice. It was not an easy friendship at the beginning, as technically it is so different from the soprano. But I sat it out, continued to practice and, bit by bit, got more accustomed. At the same time the bass clarinet started to play a more important role in the trio with Norma Winstone and Glauco Venier. And when Anouar Brahem invited me to play in his new quartet to record The Astounding Eyes of Rita, we met for a rehearsal to decide on which instruments were going to play a role on the CD, which gave me the chance to dig deeper into the possibilities of the instrument."

It was around the same time that Gesing began experimenting with the compositional potential of live looping technologies. The already-versatile instrument thus became even more so at his fingertips, which on reaLTime elicit from it a range of expression not heard since John Surman. The comparison to Surman is an easy one, for the British reedman-composer's own solo albums are master classes in multi-tracking. In Gesing's darkly forested arrangement of the standard "The Thrill Is Gone," for instance, one can hear a likeminded crafting at work. And yet, where Surman's world of sound has explicitly defined oceans and continents, Gesing's would seem to make no distinction between land and water. True to concept, he plays everything in real time, using only the looping mechanisms at his immediate disposal. To the clarinet's gamut he adds the percussiveness of his own body (tongue, cheeks, breath) and the incidental rhythms of key depressions.

Gesing reveals his rigorous classical training in an original arrangement of the "Ave Maria" by 16th-century Flemish composer Jacobus Clemens non Papa. Here the low reed sounds like a church organ. Ashen and breathy, it sails beneath a flock of melodic murmurations. Still, his jazzier inclinations are not far behind, as growls soon turn the piece into a sacred blues. Ironically enough, his above-mentioned take on "The Thrill Is Gone" leans more toward classical constructions, balancing the timbral extremes of bass clarinet and soprano sax with comfort. To this combination, "Dorothy's Dance" adds a small flute for delightful contrast. The latter tune is but one among a large portion of originals, of which "Quarter 2 Five" and "Three 2 Four" are the most distinctly off-kilter. Gesing's vocal timekeeping further broadens his field of reference to Indian classical territory, spinning an elemental feeling of travel across huge swaths of development. "A lot of what I write uses odd meters," he admits. "'Quarter 2 Five' is simply based on the movement of five against four, while 'Three 2 Four' is based on a cell of 3 4/4 bars with 2 3/2 bars stacked on top. It somehow shifts the way you hear the music, and gives it a floating quality. Working with the loop instrument I have on hand makes it easy to use complex interpolations and orchestrate them in such a way that what comes out in the end, I hope, goes to your feet rather than to your brain."

Gesing's setup gives him the freedom to explore improvisational textures, which across three titular excursions take ad-hoc flight. Their subtitles—"Morning," "Noon," and "Night"—indicate a cycling of hours in a day, but also an awareness of the seasons and an equality of terrain. "Noon" is a tactile hunk of beauty the finds the bass clarinet accompanied only by its echoes, while the more urban-flavored pulse of "Night" develops a klezmer-like veneer toward the finish. The album closes in the wide, melodic embrace of "Snowflakes," which from a deeply grounded hub spreads interlocking motifs, crystal by crystal. Like the cover photograph, taken by the composer on a cold morning in Poland, it plays with notions of reality through exaggeration and delineation. It also emphasizes an intimacy of expression that looks as much inward as outward. "In the German language," says Gesing, "one can have a 'Zwiegespräch,' or conversation, with oneself, which means that you talk very honestly and openly to yourself. When important decisions are to be made or a crisis needs to be dealt with, you get into a 'Zwiegespräch' with yourself, trying to illuminate all aspects in order to come to the best possible conclusion. It is nice for me to know that a feeling of intimacy is being transported by the music."