By MARK SULLIVAN
November 26, 2018
Sign in to view read count 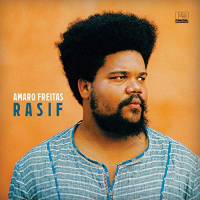 Brazilian pianist/composer Amaro Freitas is from the coastal city of Recife in the northeastern state of Pernambuco. His geographic background is important, because he has been heavily influenced by the Afro-Brazilian maracatu (dating from slavery days) and the high intensity carnival rhythms of frevo and baião, as well as the jazz tradition. Most of this album is played by the Amaro Freitas Trio, his group with drummer Hugo Medeiros and double bassist Jean Elton.

Opener "Dona Eni" immediately establishes the unique rhythmic feel of the trio. Powerful, driving, with the piano treated like a huge 88-piece percussion instrument: an unquestionably Brazilian sound, but with no reference to the expected samba or bossa nova rhythms. "Paço" is built on a rhumba-like dance rhythm, albeit one a bit too jerky for dancing. The title tune "Rasif" (a colloquial spelling of Amaro's hometown) slows things down to a ballad feel. Elton's double bass plays the reflective melody, while Medeiros contributes melodic tom toms. "Mantra" achieves a meditative state through motoric repetition, frequently emphasized by the bass doubling Freitas' left hand. "Aurora" shows a more elaborate side of Freitas' compositional style. A three part suite depicting the daily motion of the sun, it goes through distinct changes in mood—from rhapsodic to a frenetic climax driven by dynamic drumming.

The trio is joined by reed player Henrique Albino for the two final selections. "Plenilunio" ("Full Moon") has a composed sound, more reminiscent of classical music than jazz. After an unaccompanied piano introduction, Albino takes the lead on flute, while also adding baritone saxophone to the ensemble. So it is a much bigger sound, forming an elegant contrast to the earlier rhythmic music. Closer "Afrocatu" features a twisted folkloric-sounding melody over a relentless odd-metered ostinato pattern. Brief baritone saxophone solos interrupt the flow like obbligatos. The band is back into power rhythm mode, and the album ends with an exciting unison.

This is Amaro Freitas' sophomore release as a leader, and he has already proven himself as a distinctive voice in jazz piano. Well established in Brazil, he is ready to step upon the world stage.