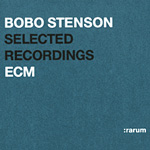 Listeners familiar with Bobo Stenson's most popular work might count him out as a hopeless romantic, but the Swedish pianist can have sharp edges at times, too. That's why this particular set bears so much interest: Stenson accents his more mellow recordings with some powerful angular energy. For example: his 1993 trio rendition of Ellington's "Reflections in D" bears only shadowy relations to the original, and the understated urgency here emits a sharp glow. And of course, Ornette Coleman tunes are always a real tip-off; two are featured here. Stenson's 1971 recording of "Untitled" with the very same trio is about as bright and edgy as one might imagine. Take that, you disbelievers!

Stenson's obviously been around for a while, and his talent has not waned. His overall sensibility lies between out jazz and chamber music, usually on the dark side of neutral. Comfortable on open ground, he lays out sparse lines without overstatement. When the small group convenes to talk, he's eager for conversation. In the much less frequent heat of intensity he seems to find an explosive inner energy. What's remarkable is that Stenson has developed a unique voice which distinguishes him from any other pianist since Bill Evans tradition. Nobody will be comparing Stenson to any other modern jazz pianist without making some dramatic leaps, and that statement enough to convince listeners to tune in.

Bobo Stenson is a traditionalist in one sense, believing that improvisation should exist within structure. His playing bears a certain contagious gentleness, which permeates recordings under his own name as well as with others. Yet at the same time he seems to be always chomping at the bit, which makes his intermittent bursts of unpredictability and crescendo all that much more dramatic. His partners seem to understand this quirk, and they know how to exploit it.

Overall: good tunes and a nice range of styles. A solid pick.

(Note: this disc represents the eighth volume of :rarum, a series of artist-picked compilations from ECM Records. It comes with notes by the artist as well as extended discographical information.)