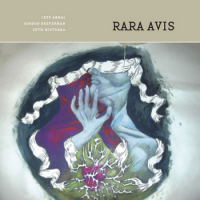 Consisting of three relatively wet-behind-the-ears yet nonetheless daring improvisers, Rara Avis is notable for its obstinate devotion to pure instrumental sounds. Most artists working in the modern creative/avant-garde area of jazz are want to use prepared instruments, play inside the piano box or bow cymbals; here percussionist Jeff Arnal, electric pianist Gordon Beeferman and saxophonist Seth Misterka stick to a more traditional approach. Still, they manage to coax a variety of sounds out of their respective instruments, creating an inventive programme that demonstrates that big ears are the most important ingredient for this kind of free-spirited improvisation.

The trio doesn’t exactly subscribe to the “spontaneous composition” approach to free improvisation, where melodies are pulled out of the ether; there’s nary a theme or motif to be found on this fifty-five minute set. But like some of the best work of groups including Evan Parker/Paul Bley/Barre Phillips and Joe Maneri/Mat Maneri/Barre Phillips, the key is interaction and strong listening skills. There is no clear leader in the group, everyone is both a leader and a follower, but this makes for pieces of rich texture and shifting emphasis. From the dark and spacious “Allucidation,” which builds from almost nothing to flurries of percussion and clusters of notes, to “Dust,” which starts ethereally and gradually develops into an anarchic maelstrom, Arnal, Beeferman and Misterka pay close attention to what is going on around them. Free improvisation of this nature can easily degenerate into individual instrumental islands, where the performers are more concerned with a considered strangeness than developing a group ambience, but in the case of this trio interplay is everything.

This is the second recording together for Arnal and Beeferman, following up their ’01 duets on Bodies of Water. Arnal has, since emerging on the scene in the early part of the decade, focused his attention exclusively on improvised music. Beeferman, in addition to his improvised work, operates in the new music arena with compositions for voice, piano and orchestra. Misterka has led a number of groups, including The Misterka Clones, The Demon and Dynasty, all of which have explored a more aggressive side of music, with hints of Albert Ayler and Rock In Opposition artists, including Etran Fou Leloublan and Henry Cow.

Together, Arnal, Beeferman and Misterka create niche music that will appeal to fans of complete experimentation with absolutely no preconceptions, no roadmaps. While they are not wholly distinctive, there is plenty to recommend; and a pure approach to instrumentation, coupled with solid chemistry, makes Rara Avis a Creative Music work well worth investigating.

Visit Generate Records on the web.