Rambo Amadeus and the ZJM Big Band at the Macedonian Philharmonic 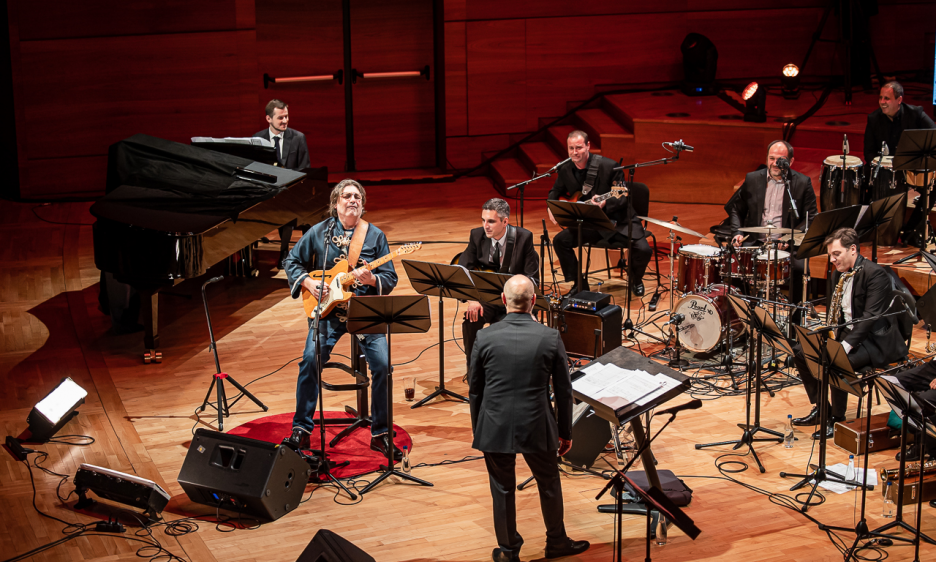 Ever since the Macedonian ZJM Big Band was launched, it has been breaking down barriers between musicians and audiences both in Macedonia and internationally with its enthusiastic and direct approach to live performance. In just 6 years since the big band was reinstated by some of the leading jazz figures of the younger generation on the Macedonian music scene, it has become an institution and a force for good. In an inhospitable place, as Macedonia is, it has managed to survive and began staging several concerts a year. What is remarkable about it are the original sounding charts that keep jazz at its heart but have the scope to incorporate experimental rock, notably their take on Radiohead, Frank Zappa, Jimi Hendrix, the Beatles, or the music of its conductor Džijan Emin. Even during the peak of the pandemic, it had a sold-out concert with renowned singer Kurt Elling at the Lisinski concert Hall in Zagreb, Croatia. Playing to a full house at the Macedonian Philharmonic, the ZJM Big Band turned out a riveting performance of songs by renowned Montenegrin avant-garde artist Rambo Amadeus with passion, skill, a ton of enthusiasm, and good fun. It was clearly destiny that these two parties joined forces for this one-off concert.

Rambo Amadeus is one of those cult music figures that appear once in a lifetime. The closest comparable figure is the legendary Frank Zappa— both are outspoken artists with singular guitar skills and omnivorous musical appetites. Both have established musical categories of their own. Amadeus's music is a melange of juxtapositions, a collage that includes funk, rock, hip-hop, classical, modern jazz, improvised music, opera, comedy skits, and electronic music. But above all, he is a master storyteller, both musically and lyrically and the outcome is a mixture of low-brow humor and high-brow music. The Montenegrins are renowned for their storytelling; Rambo has been known for his non-conformism and political and social satire, comments, and verbal darts. For the past 30 years, Rambo has been playing with various configurations and bands, but never with a big band of this size.

The ZJM big band consists of artists of various generations working at institutions such as the Macedonian Philharmonic and the Opera, as well as local jazz artists, and under its umbrella, it hosts brilliant composers and arrangers. Apart from conductor Džijan Emin who had a take on the arrangements, several others also arranged the guest's songs and their selections explored his music from his early starts in the late '80s to this day. Deploying a variety of timbres, these arrangers' vibrant yet economical writing translated Amadeus's small band works into rich big band masterpieces.

The air truly goes electric when the brass and the reeds hit the notes together. Nothing sounds like it in a live setting. The evening kicked off with "Teško, Gorko, Lako" and "Predrasude." In the next two hours, this brilliantly unified ensemble enhanced every color and detail from Amadeus's music, making for a stellar celebration of his mastery. What the big band emphasized was the jazz-funk in his music and the first quarter had a Billy Cobham jazz funk-like feel to it. This was followed by songs such as "Regiment po cesti gre," "Hipišizik Metafizik" "FGP" "Darwin Song"and "Higson Bozon" which also gave an impression of a cabaret performance with his comments and narrations, and since Amadeus is a long-term devout environmentalist and advocate of green energies they performed "Urbano" and "Beton."

Since the performance took place at the Macedonian Philharmonic's exclusive concert hall there was a danger of this location overwhelming Amadeus's abilities to lead the ensemble in a way only he could, but he proved to be in his element and the big band's arrangements were accompanied by his light-hearted and humorous commentaries which made the concert hall ring with laughter on many occasions. As such, he was a true master of ceremonies, and along with conductor and arranger Džijan Emin, he took the band to dizzying heights, making for a memorable night. The energy kept building up, dissipated, and then kept climbing again.

The big band's core is a diverse and versatile driving jazz-rock band set-up of guitar, rhythm section and piano, and keys. The various arrangers emphasized different aspects of the original compositions but there were shades of Gil Evans, Duke Ellington, and even Weather Report, and the aforementioned Billy Cobham with the lower brass riffs and noir-jazz horns with sharp solos. There are a lot of great idiosyncratic players in the band and during the evening saxophonists Kiril Kuzmanov and Petar Hristov, drummer Goce Stevkovski Septet, bassist Darko Muchev-Mucho and Zoran Kostadinovski really stood out. At the same time, the arrangements had an ingenious way of cross-fertilizing rhythms and gaining traction across reeds and horns.

The setlist also included gems such as "Halid Invalid Hari," "E Moj Rambo" "Balkan Boy" and "Fela Kuti" and for the encore, the band performed "Pod Rotacijom" and "Jedno te Isto (including a snippet of "Zastavnik Džemo"). After two hours of music and talks, all of the band members stood up for a jubilant round of applause and came off the stage all beaming and upbeat like conquering heroes. "A Miracle in the Balkans" as the concert was named, was a well-defined array of music celebrating a master by some of the leading jazz musicians in Macedonia and beyond. The concert and the good moods didn't end there with the last round of applause, but the guest and the big band went to the local "Filharmonija Café Bar" where they continued to jam and party until the morning hours.