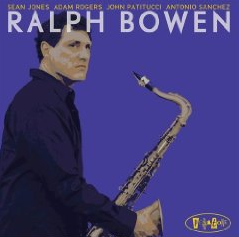 Tenor saxophonist Ralph Bowen's Dedicated is a project that was nurtured and produced by Posi-tone Records' founder Marc Free, who felt that Bowen was under-appreciated by the jazz public at large. Bowen has influenced hundreds of players through his teaching position at Rutgers, and many top jazz players know how skilled he is. Having heard him live several times, Free has long admired Bowen's sound and technical ability on his horn, and wanted people to really hear how good he was.

This goal was accomplished by starting with the concept of basing the supporting ensemble around guitar, since Bowen's previous recordings were often accompanied by organ or piano. Free and Bowen discussed several names before agreeing that Adam Rogers would be a good choice, due in part to the excellent working relationship Bowen already had with Free, the musical trust they shared, and Rogers' ability to mix subtlety and intuition into an ensemble. The logical next step was to bring in John Patitucci (bass) and Antonio Sanchez (drums), since they had already played together with Rogers hundreds of times, both with Rogers as leader, and in other groups such as Chris Potter Underground.

The musicians rehearsed together for 2 weeks in the making of this recording, and it was mixed for another 2 weeks, which is rare in the world of all-star jazz recordings.

The well-matched timbre of the group's sound reveals that the time and care put into this project paid off. Bowen has a mastery of his instrument not unlike Michael Brecker, cites John Coltrane as his main influence, but plays with more nuance and reserve than either. He travels through the music and chooses to become part of the fiber of the group-sound, except on "E.R.," which is a solo piece that let's him weave his own song, from long drawn out tones to 32nd-note runs, syncopated triplets and reflection.

That's why the choice of sidemen on this recording is so important. The slightly reserved modern cool that each player is able to bring to the studio matches up with Bowen's playing style, and Posi-Tone's Free as producer and engineer Nick O'Toole serve as kind of sixth and seventh men on this project.

Sanchez, for example, has demonstrated in his career with the Pat Metheny Group and on his solo work as well that he can play with subtlety, and make it exciting at the same time. It's not Elvin Jones-type crash and bang drumming; Sanchez often uses a light touch and many soft to medium cymbal strokes to bring out a more reflective artistic sound, but he enhances his playing by finding varied ways to communicate.

Rogers' tone on guitar is also something that blends into the collective sound. His reserved style is modern, and full of potential sparks, leaving listeners keen to hear where he will go next. But he supports the songs, and is able to soar into several important solos that would only work if they were on par with Bowen's tenor sax riffs, and they very much are.

John Patitucci is able fully to support the band by playing with a style that could be described as dark, full and round. He's like a prominent tree trunk that allows the rest of the players to branch out and ascend.

Sean Jones adds trumpet to the mix on "Mr. Bebop," playing counterpoint through the head, and taking off on a solo midway through, introducing a new sound to the ensemble at just the right time.

Dedicated consists of just six songs with a total recorded time of 42 minutes, a throwback to the days of Blue Note discs that tended to run short, but made up for it with quality. Each tune is dedicated to one of Bowen's mentors (Keith Blackley, Pat La Barbera, Jim Blackley, David Baker, William Fielder, and Eugene Rousseau).

"The recent passing of a close friend and mentor left me with the distinct awareness of my personal need to acknowledge several of my contemporaries for their support and influence on my own musical development. Dedicated is a musical message of gratitude to my mentors for their time, patience, wisdom, knowledge and friendship." (Ralph Bowen)

"One way or another we all have to find what best fosters the flowering of our humanity in this contemporary life and dedicate ourselves to that." (Joseph Campbell)