BY JACK BOWERS
September 20, 2005
Sign in to view read count 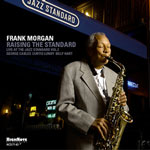 Raising the Standard, Frank Morgan's second album for HighNote, is a followup to last year's widely acclaimed City Nights, recorded, like that release, before an audience at the Jazz Standard nightclub in New York City. The lineup remains the same, with Morgan accompanied by a superlative rhythm section comprised of pianist George Cables, bassist Curtis Lundy and drummer Billy Hart.

Morgan, who was out of circulation for three decades owing to drug addiction and imprisonment for same before making a successful comeback in 1985, is one of a handful of distinctive voices on alto saxophone, post bop sector (others who spring to mind are Phil Woods, Lee Konitz and Bud Shank). Among them, he is closest to Shank in luminous sound and Konitz in economy of phrasing, even though he is very much his own man, with a vocabulary that owes its genesis to Bird but is unmistakably Morgan.

At 71, Morgan can still summon the requisite fire to scorch such up-tempo numbers as Miles Davis' "Tune Up and Wayne Shorter's "Footprints, but he prefers the placid and more meditative temper of ballads such as "Polka Dots and Moonbeams, "In a Sentimental Mood or "Old Folks. He's at his lyrical best on them, as he is on Ellington's classic "Don't Get Around Much Anymore and Cables' lovely "Helen's Song. Completing the charming program are Shorter's soulful "Nefertiti and John Coltrane's romping "Bessie's Blues, as agreeable a closing number as one could want.

Good as he is, Morgan has to stay on his toes to keep pace with his sidemen, who are among the best in the business. Cables, an erudite master who should be winning polls, is a perceptive accompanist and resourceful soloist; Hart is one of the most eloquent and tasteful drummers on the scene; and Lundy keeps unerring time, giving the others, as Morgan says in John Murph's liner notes, "that assured feeling that your back is covered. Even though Morgan is the headliner, no one is less indispensable than he in helping to make the session sparkle.

Raising the Standard is another impressive tour de force for Morgan and his mates, one that is easily recommended.