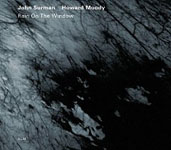 With John Surman's Brewster's Rooster (ECM, 2009) refocusing attention on the British saxophonist/bass clarinetist's jazzier proclivities, it's a good time to assess Rain On The Window—not yet out in North America, but available in Europe since the spring of 2008. A duet recording that picks up, to some extent, where Proverbs and Songs (ECM, 1997) left off, this time it's Howard Moody on church organ, rather than Surman's longtime British cohort, John Taylor.

But there's more to it than just a change in musical partners. Within the duo context, Surman and Moody bring greater spontaneity to the table, contrasting Proverbs and Songs' more structured environs, where Surman's commission was scored for church organ, choir, and solo speaker. Moody conducted the choir on that 1996 BBC recording, but it was his substituting for Taylor on a number the project's live performances that ultimately led to this strictly duo session, recorded in Oslo, Norway's resonant Ullern Kirke.

Moody had, in fact, largely given up playing organ, frustrated by the inherent traditionalism associated with the instrument; but, as Surman relates in a 2009 interview, ..."you're not going to get any of those problems with me." On this collection of ten originals (all by Surman with the exception of Moody's dark-hued solo feature, "Tierce"), three spontaneous compositions, and two rearranged traditional tunes, Surman and Moody can't escape a certain spirituality, but equally they bend and, in some cases, completely break with any preconception as to how a church organ-based recital should be.

It's hard to escape the conventional image of a powerful church organ. Still, Surman and Moody's remarkably structured-in-nature yet effortlessly unpredictable collective improvisations go to darker, more dissonant places than are likely to be heard from the church hymnal. The aptly titled "Dark Reeds" builds from nothing, Surman's pure and somehow vulnerable tone on baritone creating memorable melodies both driven and contextualized by Moody's sensitive attention to harmony and timbre. Two versions of Surman's "Circum" open the disc, and then, halfway through, act to refocus the disc's narrative. Pensive and inward-looking, both Surman and Moody soar over its cascading changes, entering into the kind of improvisational trade-off, towards the end of "Circum I," that may find inspiration in jazz world, but is otherwise completely distanced from its tradition—redolent of its spirit, rather than the letter.

Two traditional tunes bring greater song-form lyricism. "O Waly Waly" is better known as the ultimately optimistic "The Water is Wide," while on "I'm Troubled In Mind," Surman and Moody create a melancholy yet strangely uplifting instrumental from words originally sung by slaves whipped by their masters.

Nearly 65, the now Oslo-based Surman continues to move orthodoxy out of its comfort zone. Profoundly beautiful, with intuitive interaction normally associated with jazz, Rain On The Window presents improvisation of another kind; one rooted in the spiritual tradition of church music, but taken to new places, thanks to the persistent refusal of both Surman and Moody to stick with the status quo.

Visit John Surman and Howard Moody on the web.