By Eyal Hareuveni
September 25, 2011
Sign in to view read count 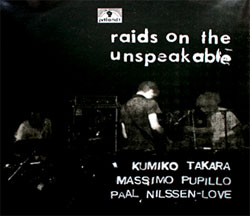 This live recording was captured in a small club in Copenhagen, and finds the trio in such a powerful moment that even the neighbors protested. "Ochlocracy," the short opening track, features Pupilo building dense layers of distorted and scorching sounds through Nilssen-Love's uncompromising drumming, but the addition of Takara's vibes inject an openness and tenderness to this tough mix. "Cain's Breed" begins as an abstract, spare improvisation that stressed the metallic elements in Nilssen-Love's cymbals and timpani drums, but almost instantly and organically mutates into a hard-rocking and highly addictive groove, still with nuanced rhythmic textures.

The other side of the 33-minutes Raids On The Unspeakable begins with the short, grinding interplay of "The Uncanny," led by the inventive and scorching Pupilo, his electric bass enhanced with many effects, but is soon contrasted by the gentler sound of Takara's vibes. The closing "Sigmund, We Have A Problem," presents the telepathic interplay of this unique trio, while continuing to explore shifting grooves—deeper and deeper into uncompromising rhythm—with humor, elegance and fearless determination.

With Raids On The Unspeakable , this trio demonstrates a rare potential. Hopefully it won't be long until its next release.

Ochlocracy; Cain's Breed; The Uncanny; Sigmund, We Have A Problem.