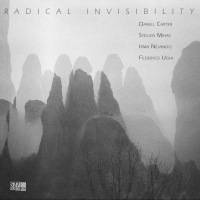 Always on the farthest fringe of both the downtown New York music scene and the jazz world at large hasn't stopped multi-instrumentalist Daniel Carter from leaving an indelible imprint on the greater consciousness. He has worked alongside other mavericks, notably Thurston Moore, Yoko Ono, Cecil Taylor, and Jaco Pastorius. His horns are fiery, disruptive and probing, exultant and brooding, seething and, since the mid-70's, searching as incessantly and masterfully for the right note at the right time.

That said, the music of Radical Invisibility, just one of several 2019 recordings that feature Carter and his deep street cache, (others 577 Records releases include the hypno/electric groove of New York United, the emergent tape loops and sitar of Harbinger, the modal strangulations of Concrete Science and the upcoming Electric Telepathy due in September) uncoils like updated, lost tracks from any of the archival 1968-1970 Miles Davis releases of the past few years.

"Ms. Gertrude," written by Carter with Gertrude Stein in mind, states the case for the whole of Radical Invisibility: graceful and infectious even at its most free form and radical. All of it is a shifting landscape, sinister yet eerily enveloping, with Carter's own keyboard squiggles darting all around his long, lyrical passages on saxophones, trumpet, clarinet, or flute. Ever attuned to the elasticity of the creative moment, bassist Irma Nejando and drummer Federico Ughi wind and unwind the groove. Ughis's knotty, gnarly, "Diaspora Guinéa" is an elliptical fourteen minutes of guitarist Stelios Mihas choppy shards at once challenging and complimenting Carter's unhinged flights, as the rhythm section abandons time and meter only to rediscover it further along.

Mihas's imagining of two of Mozambique's more well known Chopi musicians "weNyamombe and Gomukomu weSimbi" is an even more unruly construction given Carter's playful trilling on flute, his urgent sax, the guitarist's own caustic meanderings and Ughi and Nejando's disloyalty to any particular beat or time pattern. A twenty minute ebb and flow, charge and retreat, that resolves to a seismic calm you just couldn't have expected. Compelling head music to say the least.