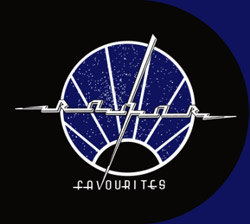 Full credit is due to Mike King and Reel Recordings for this exercise in historical reclamation. For a brief period back in the mid-1970s, Radar Favourites was a band with a pedigree. For one thing, it was saxophonist Geoff Leigh's first venture after his departure from Henry Cow, while guitarist G.F. Fitz-Gerald was responsible for the album Mouseproof (Sunbeam Records, 1970), a highly singular title from an era not lacking in singularities. Drummer Charles Hayward, a man who once played in Quiet Sun alongside Roxy Music guitarist Phil Manzanera, went on to be in This Heat. So did all of this result in some kind of sound clash? Not a bit. This was a band of individuals that knew its collective mind like few others, and even though its music covered a wide variety of bases it's still shot through with an impish appreciation for the infinite possibilities of group interplay.

It's this quality, amongst others, that makes keyboardist/singer Cathy Williams' "Umbrella Walk" frustrating in its brevity. Over the course of its almost six-minute duration, however, the music moves from being deliciously reflective—topped off with the composer's voice—to a kind of loose but informed jamming that is far from common. Fitz-Gerald also gets the chance to show off his rock chops, even though his sensibility has always been so distinctive that such a description doesn't fully capture the extent of his abilities.

The band's aptitude for jamming doesn't result in any of its negative connotations. Leigh's "Tree and Tanks" is a case in point, with a little of Lol Coxhill detectable in his soprano sax. The rhythmic precision of the track is entirely the band's own, with bassist Jack Monck proving, with his mobility, just what a difference such interventionist playing can make.

The group-credited "Blastest" is a snapshot of what the band was capable in a live setting. Tapping a seam not dissimilar to the free rock of Leigh's previous band, the music progresses by mutual consent. Williams' keyboard and Fitz-Gerald's guitar cooperatively compete for attention, but on one level it's the work of their compatriots that catches it. The issue of personalities is irrelevant , given that the overall effect is a reminder of just how creative things were back in the day.