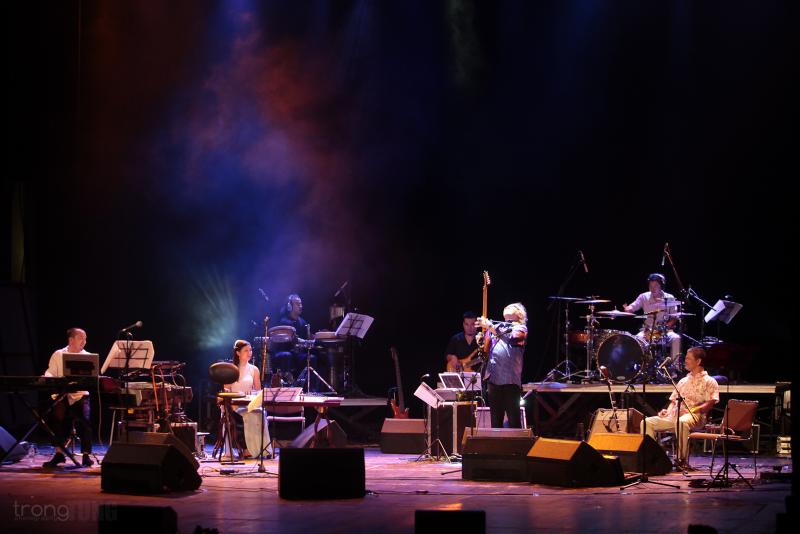 By IAN PATTERSON
September 12, 2012
Sign in to view read count
Quốc Trung / Nguyên Lê / Dhafer Youssef / Thanh Lam / Rhani Krija / Kiều Anh Hanoi Opera House
Hanoi, Vietnam
September 1, 2012
The Hanoi Opera House celebrated its centenary in 2011, and for most of those first hundred years, Vietnamese traditional and European classical music reverberated within the walls of this elegant venue. However, as the Opera House enters its second century, there are signs—as in Vietnam itself—of gradual openness to more modern tides. This concert—billed as Khởi Nguồn (The Root Beginning)—was conceived by veteran Vietnamese composer/keyboard player Quốc Trung, and celebrated not only the beauty of Vietnamese music but the common roots of all music, Eastern and Western, traditional and contemporary.

The invited guests for what was the first in an ongoing series of such projects—guitarist Nguyen Le, oudist/singer Dhafer Youssef and percussionist Rhani Krija—are all musical polyglots, so it was no surprise that such diverse language was explored with the outstanding traditional Vietnamese musicians.

Lê is no stranger to fusing jazz/world sounds with Vietnamese folk song; since Tales from Viet-Nam (World Records, 1996)—described by Jazz Times as "a minor masterpiece"— Lê has gone on to produce/record a series of intimate collaborations with singer Huong Than on the ACT Music label, most notably on Fragile Beauty (ACT Music, 2008). These recordings have brought together traditional Vietnamese musicians with such modernists as trumpeter Paolo Fresu, bassists Richard Bona and Etienne Mbappe, reed player Paul McCandless, drummer Karim Ziad, kotoist Mieko Miyazaki, and Youssef, amongst others, creating music that is essentially roots-inspired and which covers pan-global terrain.

Inevitably then, the concert drew from a number of musical wells, but at its core lay the soul of Vietnam. "Lý mười thương ("Ten reasons for loving you") began with the immediately captivating singer Kiều Anh, buoyed by Hùng Cường's washing cymbals, Hoàng Anh's gently voiced flute and Van Mai's zither, and created a traditional lyricism that would also have seduced an audience in the Opera House a century ago. Traditional Vietnamese music is under siege from Western pop influences, and Lê has done as much as anyone to present---and preserve—this beautiful music in a modern context. Trung's minimalist synthesizer provided the first bridge between past and present, with electric bassist Phan Kiến, percussionist Krija, drummer Cường and Lê conjuring a Joe Zawinul-esque groove, which grew powerfully, with Kiều Anh at the helm. 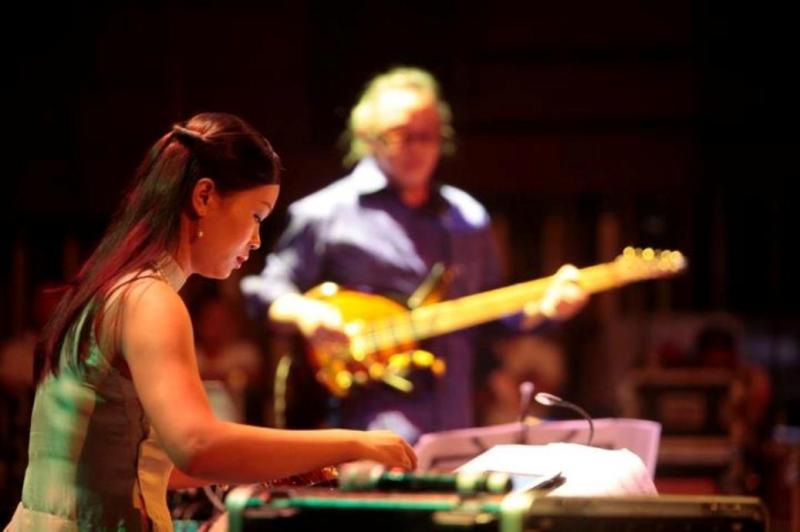 Youssef brought his rare vocal talents and abundant energy to three numbers before the interval. His haunting, almost devotional lament that followed the plaintive flute intro to "Wishing Upon the Moon" was echoed by Anh, and the pair cast a spell over the audience, which erupted in applause. As their voices soared to heady emotional heights—surely transporting many among the audience along with them—it was difficult to believe that the sensational Anh was just 17, or that this vocal union had not originally been planned, arising only out of Youssef's urging during pre-concert rehearsals.

The languid, atmospheric "Mangustao," from Tales from Viet-nam, began with oud and guitar in gently singing unison and zither in accompanying role. Youssef and Anh's voices dovetailed, with the Tunisian's staggering vocal range plunging to didgeridoo depths and climbing to quasi-falsetto highs. On a short solo spot, Lê brought an Arabic quality to his ever-lyrical phrasing, leading into a unified ensemble closing statement on this meditative, yet captivating number. Youssef's "Byzance," from Lê and Fresu's beguiling and kaleidoscopic collaboration, Homescape (ACT, 2006), featured oud, Arabic percussion, an exhilarating funk-like motif, further vocal acrobatics from Youssef and Anh and a searing metal solo from Lê. Kajira's animated percussion solo on darbuka (Arabic goblet drum) and frame drums led into a rousing ensemble passage, and closed the first set on a high.

The aptly title "Graceful Bamboo" began the second set, with Hoàng Anh's lilting flute gliding over washing keys and a simple frame drum rhythm. The flautist was a key element in the mix throughout the concert and displayed tremendous versatility on array of various-sized flutes. Anh's most restrained—though quite beguiling—vocal performance of the set led into a highly melodic refrain played simultaneously by zither, guitar, flute and keys. Trung was a subtle yet constant presence throughout, coloring the music with dreamy minimalism. On "Streamline" his sparse, sci-fi lyricism offered striking contrast to Anh's gentle, more earthbound ululations. A lengthy ambient mid-section suddenly blossomed into a powerfully stated group melody, with Anh's cry rising above the collective voice. 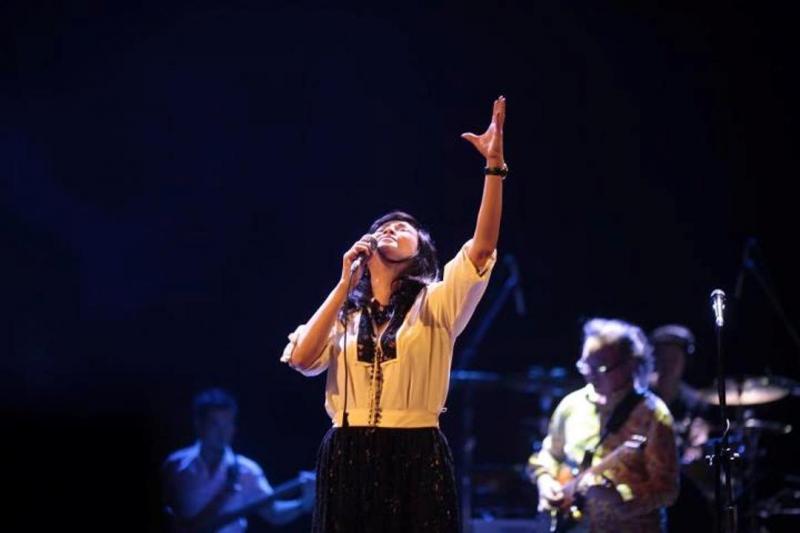 The upbeat "Drifting Away"—the least overtly Vietnamese song of the evening—featured a drum duet, with Kajira's fingers a blur on goblet drum while Cường worked his more conventional kit, given local color by several Vietnamese ceremonial drums. On either side of the percussion fest, Xuân Diệu's Vietnamese rap provided a teasing entre into his frenzied erhu solo, and Lê delivered a lively jazz-rock solo over a band riff that sounded like guitarist Santana's cranked-up version of timbale legend Tito Puente's "Oye Como Va."

Deep keyboard drone and Cường's thunderous drum rolls provided stark contrast to Diệu's folksy lyricism on Vietnamese lute at the beginning of "The Legend Story." Trung's computerized bell effects and Lê's sinuous lines served as a backdrop to Youssef's high-pitched vocal gymnastics and Anh's equally striking vocal turn. Lê's most adventurous solo of the set began with measured phrases that were melodic and emotive but gathering wind in his sails, he soon launched into a repeated riff that gathered up the band around him, before launching into fierce, Jimi Hendrix-inspired soloing.

Whilst Lê's high-energy soloing exhibited rock and jazz-fusion roots, these show-stealing interjections were sparingly used, and further illustrated the wide reach of his influences. However, for the most part, the guitarist's jazz-centric accompaniment was subtly impressionistic, blending with the other instruments to add another hue to the melodies. At times, his elegant bending lines sounded zither-like, and at others he conjured West African soundscapes. His use of loops was understated and lent sotto voce atmospherics to the ensemble sound. 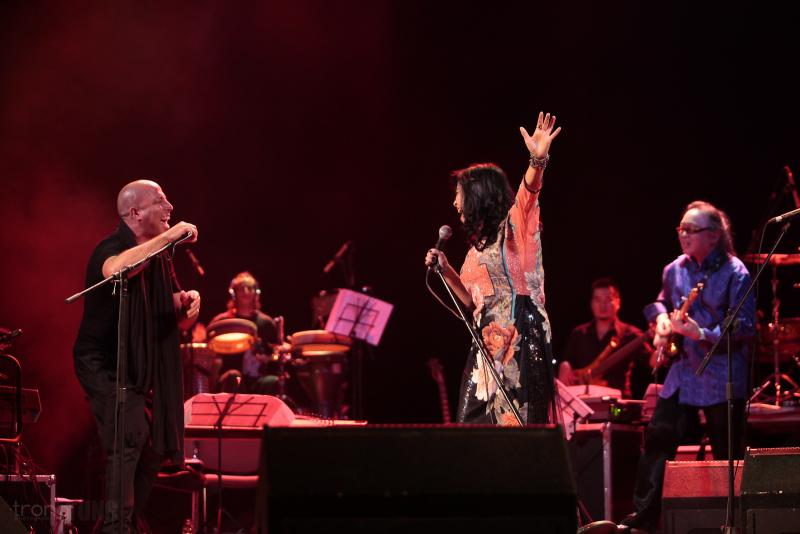 The encore, "Hề mồi," stemmed from a traditional melody played on zither, flute, guitar and keys over an unrelenting goblet drum rhythm, gradually giving way to a series of breathless call-and-response exchanges between the musicians, as they traded playfully in a signing-off jam. As the applause died down, Krija took the microphone to give thanks to the hosts, praising "the spirit of the country." Nowhere is the spirit of Vietnam better represented than in its rich musical tradition, and as this highly memorable concert demonstrated, it would be folly for Vietnamese youth to cast aside the old in favor of the new, when the two work so beautifully together.