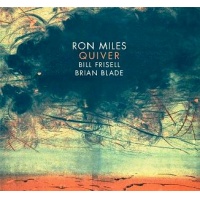 Some musicians are recognized not only for their abilities but also their vociferous commentaries, holding true the phrase that "the squeaky wheel gets the most attention." Yet there are more subdued voices who let their music do the talking, as is the case for Ron Miles' Quiver, a project led by the Denver-based trumpeter and his talented cohorts, guitarist Bill Frisell and drummer Brian Blade. These gentle masters are highly respected leaders with expansive discographies and projects that have covered a wide spectrum of contemporary music.

Miles and Frisell have worked on a number of projects including the trumpeter's Heaven (Sterling Circle, 2002), displaying a simpatico relationship of both musicianship and empathy. This becomes evident in Fred Fisher's "There Ain't No Sweet Man That's Worth the Salt of My Tears" dating back to the 1920s—a bluesy rendition with a gregarious and soulful flow. Blade adds another layer to the discourse with delicate colorations that make this and the other tracks all the more enjoyable.

Like Frisell's Disfarmer (Nonesuch, 2009) and Blade's Mama Rosa Verve, 2009), Quiver celebrates the iconic sounds of Americana, juxtaposing its historical and contemporary contexts. The Southern hospitality of the boisterous live recording "Just Married," filled with Miles' soft-toned purrs and Frisell's lively twangs, and a stimulating cover of Duke Ellington's swinging "Doin' the Voom Voom," with Blade supplies artful drum thumps, shuffles, and crashes in the melodious theme, represent just a few of the fresh ideas mined from the roots of pop, blues and jazz.

Less proves to be more in many of the compositions, as Miles states "I conceived it so that there was a lot of space in the music." This is evident in the gorgeous "Guest of Honor," where the trumpeter introduces the theme; Frisell later embellishes it, and Blade adds just the right amount of percussive grace to the syncopated ragtime rhythm. Like its predecessors, the tune's measured walk is confident, elegant, and never overstated. The release epitomizes Miles' style as he quietly leaves his mark as an exemplary trumpeter.

Bruise; Queen B; Mr. Kevin; There Ain't No Sweet Man That's Worth the Salt of My Tears; Just Married; Doin' the Voom Voom; Days of Wine and Roses; Rudy Go Round; Guest of Honor.