BY EYAL HAREUVENI
September 1, 2006
Sign in to view read count 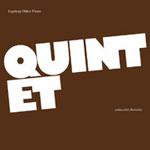 Norwegian bassist Ingebrigt Haker Flaten gained international recognition through his frequents visits to the Windy City and collaborations with Chicago heroes such as Ken Vandermark and Fred Anderson. But in his eleven years as a professional musician, Flaten has covered much more ground than just modern and free jazz. His interests have extended to local rock bands like Motorpsycho and Cato Salsa Experience, as well as musical exchanges with musicians from India, South Africa and Palestine. On Quintet, Flaten's second release as a leader after Double Bass (Sofa, 2003), he gels all these influences into an impressive mix.

The opening track, Flaten's "Maxwell Siler Demon," states the direction. Heavy fingering by Flaten, a steady backbeat by Rundkvist, and folky fiddle playing by Kvenberg draw an inviting theme. But then the metallic and punkish guitar of Hana, whose resume includes a stint with the Norwegian metal band Noxgat, takes control with a typical fractured solo above rhythmic playing by Flaten and Rundkvist. Meanwhile Kvenberg seesaws the theme, and Holm's baritone sax shrieks and soars. Charlie Haden's classic "Playing" receives the needed lyrical treatment, with almost unison playing by Flaten, Kvenberg, Hana and Rundkvist—leaving Holm (on clarinet) and later Kvenberg to improvise on this beautiful melody.

Flaten's "Seemingly" moves through curved, funky lines in a way that brings to mind some of the latest outfits led by Henry Threadgill, with their original instrumentation and unorthodox swinging style. Kvenberg leads Flaten's ballad "Ceta" through the leader's heavy strumming and Rundkvist's spare drumming, till Flaten formulates a slow groove that drifts Holm and Hana into the piece.

An excellent statement by a unique band.