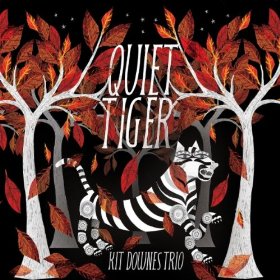 When it's time to follow up an album nominated for a major, mainstream award such as Britain's Mercury Prize, jazz artists face a conundrum. Having enjoyed a year or so of unprecedented publicity, and keen to keep it coming, the choice is between a carbon copy of the nominated album, designed to maintain the lucrative, but fragile connection with non-specialist critics and listeners, and a less commercially considered trajectory, going where the music dictates.

Downes has retained his core trio, with bassist Calum Gourlay and drummer James Maddren, but augments it, on most tracks, with cellist Adrien Dennefeld and tenor saxophonist/bass clarinetist James Allsopp, who is often overdubbed on both horns. Downes has also retained his finely judged balance between the lyrical and the abstract, and his gift for sapient grooves, but used the increased harmonic and textural possibilities opened up by the expanded lineup to take his music into a bigger, and at times darker, playground.

The addition of Allsopp, in particular, gives Downes' "trio" a weight and breadth of expression not unlike that heard on Neon Quartet's Catch Me (Edition, 2010), another highly recommended disc, on which Downes was featured alongside saxophonist Stan Sulzmann. Downes' focus on Quiet Tiger continues to be the core trio, but Allsopp's overdubbed voicings are sufficiently integral to the sound that , when the group takes to the road later in 2011, the reed player will be joined on stage by tenor saxophonist Josh Arceleo, the better to recreate them.

Even at its darkest, as on the sinister "Wooden Birds," Quiet Tiger hums with joie de vivre. Mostly, this is understated, but occasionally it breaks into an outright laugh: on the up-tempo and rollicking "Tambourine," Downes channels the bluesy chromaticism of Abdullah Ibrahim to great effect, returning to a similar stylistic ballpark on the slower, dreamier "Skip James." The lyrical "With A View," "In Brixen" and "Fonias" are simply gorgeous, while "The Wizards," Allsopp's showcase track, is surging and forceful, foregrounding the tenor saxophonist over big piano and even bigger drums.

As a member of Neon Quartet, Allsopp's Golden Age of Steam and Troyka, Downes gave British listeners several truckloads of pleasure in 2010. In 2011, with his trio—be it a three piece, a quintet or (live) a sextet—he's doing so again.