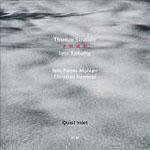 A reduction in personnel rarely results in a broader musical expanse, but that's just what happened to Food, since trumpeter Arve Henriksen and bassist Mats Eilertsen departed in 2004. Molecular Gastronomy (Rune Grammofon, 2008)—Food's first duo recording, though the use of guests fleshed the group out to a trio—was Food's most accessible album to date, without sacrificing any of its inherent risk and sound of surprise. Quiet Inlet—Food's first for ECM, and featuring Austrian guitarist Christian Fennesz on three tracks and Norwegian trumpeter Nils Petter Molvaer on four—follows Molecular Gastronomy's path, but remains equally traceable to earlier albums, including Food's quartet swan song, The Last Supper (Rune Grammofon, 2005).

Even as a duo, Food generates a lot of sound. Strønen, in particular, combines bastardized drum kit, hand percussion and technology into a distinctive soundscaping approach, from pulse-driven to textural; spatially ethereal to jagged and dense. Ballamy's more economical playing is equally key in establishing a group sound, and based on its performance at Punkt 2006, Food could easily have continued on as a duo, but increases the unpredictability quotient by introducing a third player to the set.

Ballamy has an ideal foil in Molvær on the airy "Chimaera," where Strønen creates an odd jumble of electronics and in-the-gut percussion, sampling his band mates in real time to augment the hovering landscape. Molvær's harmonizer expands his recognizable tone, over which he orbits lyrically with Ballamy's equally spare and melodic lines. On the asymmetrical "Becalmed," delays and looping turn simple motifs into serpentine ellipses, where soprano and trumpet interact in and out of time, as fragments reappear across the three-dimensional landscape, often buried in the weeds of the mix. A more decided rhythm and gentle pedal tone lend "Cirrina" its foundation, with Ballamy and Molvær engaging in an extended call-and-response, but this is no exercise in competitive chops; it's a sonic laboratory where the two push-and-pull, creating a dynamic ebb and flow that ends almost as soon as it begins, with Strønen alone on the fade-out.

Fennesz's contributions are more difficult to discern, if only because he's sculpting sound with his guitar as a controller, rather than playing it in more conventional fashion. Still, his are strikingly different than Molvær's, creating jagged and darker sonics on the closing "Fathom," and a more cushiony envelope of sound on the opening "Tobiko," where Strønen's propulsive rhythm reflects his use of an array of different sticks and brushes (and his hands) to strike drums, cymbals, gongs, bells, wooden blocks and more. Fennesz's tracks are more fervent in energy and groove, with "Mictyris" driving forward with a curious hint of skewed New Orleans Second Line which gradually devolves into freer terrain.