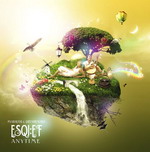 Syaharani is often referred to as Indonesia's queen of jazz, and while she possesses a soulful voice, powerful and touched by the blues, Anytime is essentially a crossover album, and a highly rewarding one at that. When Syaharani's in full flight she evokes early Grace Slick's power, however her extensive range of emotions are more reminiscent of Annie Lennox. Twelve original songs are notable for their strong, memorable melodies and are sweet and breezy without being saccharine. Several songs have strong commercial possibilities though the album never feels like an overtly commercial enterprise. Instead, it sounds like a slightly epic soundtrack to a summer of sun, love and good times.

Acoustic guitar, skipping, danceable rhythms and velvety backing vocals accompany Syaharani's crystal-clear voice on the upbeat opener "Kiranya." Syaharani's unselfconscious scatting here is a trademark of a vocalist who enjoys the thrill of improvisation. The full range of Syaharani's voice is heard to good effect on the lovely "Mungkin (Katakan)" which begins as a delicately sung ballad, an ode to love, before gaining wings on which the singer's powerful delivery has a nice, raspy edge.

The warm-toned trumpet of Ian Ingram, the mellow keyboard of Fajar Trias and the strummed guitar of veteran Donny Suhendra color much of the material on Anytime though soloing is all but absent. This is a songwriter's album and the songs are inherently memorable without shows of virtuosity. One pleasant exception is Suhendra's short but pretty acoustic flourish on "Jangan Lagi Datang."

There are two versions of the ultra catchy "Sayang Sayang Sayang," a hit single if ever there was. The first—a dance version—contains a short burst of electric guitar and a vocal chorus that repeats the delightful refrain. The second—the more pop-like original version—has a rockier guitar cameo, Hammond keyboard and stronger vocals.

"Cancellation No More"— one of four songs sung in English, has an absolutely killer bass line from Adi Dharmawan, and sounds like one of those epic tunes that Robert Plant pulls out of the hat once a decade. Syaharani's voice soars here and is totally irresistible. "So far away" and "De'dia,"—a song that Syaharani has performed with the Yellowjackets—are vehicles for the full range of the singer's voice. "Picnic to the Sky" is a guitar-driven, pop-rock anthem that would have any festival crowd jumping up and down in delighted abandon; Syaharani's impassioned delivery hits a high here.

The CD's beautiful packaging features artwork akin to Roger Dean's and is another sign of the quality that runs throughout Anytime from start to finish. Soothing and uplifting in turn, these melodic, driving songs stand up to repeated listening and show off Syaharani's remarkable talents at their very best, making Anytime one of the crossover albums of the year.