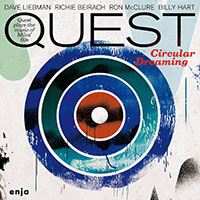 Now entering its fourth decade, Quest has covered a lot of territory in that time. Featuring, since inception, saxophonist Dave Liebman and pianist Richie Beirach—truly one of the longest-lasting partnerships in jazz; one marked by an inimitable shared understanding and distinct musical language—Quest's initial approach was perfectly articulated by Storyville's 2010 reissue of the quartet's second and third releases, Searching for the New Sound of Be-Bop, the first to stabilize its lineup with bassist Ron McClure and drummer Billy Hart). Quest's early records may well have been forward-looking extrapolations on where bebop might have headed, but later records like Quest of One Mind (CMP, 1990) found the group exploring considerably freer terrain.

If it's true that we are the sum total of our experiences then, for a group with Quest's longevity, that total is, indeed, a far-reaching one. At a time when tributes to trumpet legend Miles Davis seem almost de rigueur—and, in Liebman's case, something he's already done more than once with the fusion-esque Back on the Corner (Tone Center, 2007) and Miles Away (Owl, 1994)—it's perhaps no surprise that Quest should put out Circular Dreaming, with its subtitle Quest Plays the Music of Miles' 60s. But it should also come as no surprise that, despite some well-known choices, with a particular emphasis on saxophonist Wayne Shorter—whose six-year tenure with Davis left a number of compositions that have since entered the jazz canon, including "Footprints," "Pinocchio" and "Nefertiti"—Quest's approach to this music is so seamlessly integrated with its own repertoire that, aside from a certain element of familiarity, the music absolutely feels of a kind with Circular Dreaming's two originals: Liebman's brooding, indigo-hued "M.D." and Beirach's similarly dark but more intrinsically lyrical title track.

But Quest doesn't just choose familiar pieces, though when it does it completely redefines them. "Footprints," from Miles Smiles (Columbia, 1966), is turned—first simmering then ultimately boiling over—into an intense, 4/4 burner, with Liebman's piercing tenor moving from visceral low register pushes to gritty upper register screams, bolstered by McClure and Hart's unrelenting swing and Beirach's impossible-to-anticipate harmonic movements through what remains, essentially, a blues at its core but whose form is so pushed and pulled as to be nearly unrecognizable beyond its well-known theme. Shorter's lesser-known closer, "Paraphernalia," from Davis' transitional Miles in the Sky (Columbia, 1968), is similarly twisted and turned from its original laidback foundation into another barnstormer, with Beirach delivering a career-defining solo where his longstanding classical interests are rendered crystal clear in his fugue-like, two-handed contrapuntal independence.

Liebman focuses primarily on tenor for this date, though his unmistakable soprano defines the group's look at Shorter's title track to Davis' Nefertiti (Columbia, 1968). A lengthy duo intro—where Liebman's nanosecond responses to Beirach's spontaneous reharmonizations speak to their telepathic connection—before McClure and Hart enter with an ambling but muscular swing to reshape the tune, is just one example of Quest's MO, as Michael Cuscuna astutely describes, in his brief liner note, as "interdependent group music rather than the soloist with rhythm aesthetic."

No longer driven to be either free or form-based, Quest has reached a point in its career where it can be one, the other—or both. The group's very name defines it, and with Circular Dreaming, Quest has managed both as fine a tribute to Miles Davis as there's been and a consolidation of its own multifaceted concerns, once again raising its own bar without there ever being any doubt that Liebman, Beirach, McClure and Hart will—individually and collectively—be able to meet it.