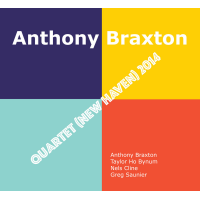 The shifting moods of Anthony Braxton's Quartet (New Haven) 2014 probably have to do with the song dedications. Each number reflects a famous and important popular musician and composer—-Jimi Hendrix, Janis Joplin, James Brown and Merle Haggard. These four musicians would most certainly provide a strange but intoxicating mix if played at a party. Yet Hendrix's laid back and yet intense style, Joplin's unique blues passion, Brown's explosive showman funk and Haggard's homespun country songs serve as the inspiration for Braxton, himself a (the?) dominant figure in the shape of jazz today and tomorrow.

To explore the lexicon of these various artists, Braxton chose three erstwhile companions and students of his music—Taylor Ho Bynum, who plays a plethora of brass instruments, guitarist extraordinaire Nels Cline, and the inventive drummer Greg Saunier. Braxton himself plays a number of saxophones on the album, from the diminutive sopranino to the giant booming contrabass. The result—four hours of music that is texturally rich, exciting and dynamic.

There is much to treasure on this set of performances. Braxton moves between his saxophones like an actor might change costumes during a scene, and he exhibits mastery of all of them, despite their different sized mouthpieces and instrument bodies, and the different embouchures required to generate sound. While Braxton uses the various instruments to add nuance and flow to the improvisations, he also creates textures that run from low-level growls to playful and soulful strolls. At times he produces angry outbursts like a solar flare bursting out of a hot plasma sun, or he can just as easily spin racing notes that whirl and twirl like a high-speed revolving door that cannot be stopped. While Bynum's Lester Bowie-like attacks, howls and antics often take place behind Braxton, when he emerges as the dominant force, as he does notably on "Improvisation Three" and "Improvisation Four," his roller coaster fingerings and dynamics suggest an unsurpassed technical brilliance. Bynum also uses his set of horns to create sonic terrains that erupt with energy and speed demon activity. Best of all, when both Bynum and Braxton are simultaneously creating explosive surges and runs, the music achieves a level of spontaneous flow that arcs like a giant geometric wave.

The other two quartet members add their own vocabulary to the mix. Cline's contributions can run from sinister ("Improvisation One") to mysterious ("Improvisation Two"), and his use of abstract notes, electronics, distortion and dissonance delivers a constantly evolving landscape. Saunier works his trap set, bells, cowbells and other artifacts to create multi-rhythmic environments which allow his bandmates to seamlessly interact. His drumming is in constant motion, whether using cymbals that bring to life the beauty at play between Braxton, Cline and Bynum ("Improvisation 4"), or his all over plops, stutters and accents that through some hidden mechanism manages to bind his cohorts disparate speed demon runs or legato and eerie phrases into a cohesive whole.

Immaculately recorded, Quartet (New Haven) 2014 demonstrates the genius of Anthony Braxton. With the passing of Cecil Taylor and Ornette Coleman, Braxton and Roscoe Mitchell remain the last living cornerstones of free music. The intense beauty exhibited here reflects Braxton's skills and vision—both in the free jazz "tradition" and as a beacon to the new roads being carved out in the music of today.