By BRUCE LINDSAY
October 7, 2014
Sign in to view read count 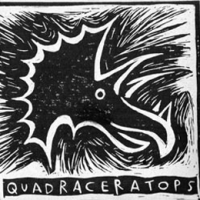 It's a question that's puzzled and divided jazz fans and critics alike, since before Louis Armstrong left New Orleans. There's been no sign of resolution and the dissent continues as the jazz world wrestles with this thorniest of debates. Just what is the best-est dinosaur ever? The music on this self-titled debut provides the answer—it's the Quadraceratops.

This particular Quadraceratops is a London-based septet led by alto saxophonist and composer Cath Roberts, who brought the band together in 2011. As befits a band named after a dinosaur (albeit an imaginary one), the full-on Quadraceratops can rattle the rafters with the best of them. Imagine Woody Herman's Thundering Herd if it was a herd of four-horned monsters. It has its softer moments, too: tunes often begin relatively sedately, just one or two instruments, before the band opens up.

"Dinner With Patrick" opens quietly, Dave O'Brien 's Rhodes and a couple of bars from the horns suggesting that something akin to Miles Davis' Birth Of The Cool might be on its way. Once the rhythm section kicks in—Olly Blackman's piledriving drum beat at its heart—things get stranger and louder. There's a cheeky sense of humor at work here, as well as a keen sense of dynamics. If it sounds like the dinner is not going too well, that may be because the titular Patrick is Patrick Bateman, anti-hero of Brett Easton Ellis' American Psycho.

Quadraceratops doesn't just do loud or strange. It's quite capable of laying down a hypnotic groove ("Song For The Worker Bee," the insinuating riff of "Chair-O-Planes"), crafting a gentle ballad ("Spiderling," featuring O'Brien on piano) or mixing quiet, almost introspective, ensemble passages with Henry Spencer's free-blowing trumpet ("Calico," the name of Roberts' cat). Roberts' compositions give plenty of space for solos—the prog-inspired "Flying South" serves as a foundation for a range of solos including those of bassist Jason Simpson and trombonist Magnus Dearness .

There's a lovely "home-made" feel to the album's rather tactile cover—a simple black print on rough grey card, produced by Roberts herself—which shows the Quadraceratops to be a cheerful, friendly beast. It's a musically adventurous one as well, with the power and talent to realize that adventurous streak.