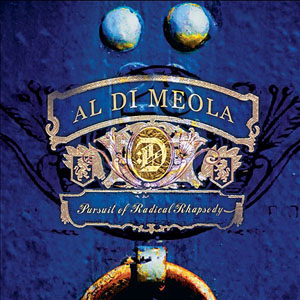 Those who follow the guitar world are likely to be familiar with Al Di Meola, either from his stint with Return to Forever or his own,four-decade solo career. As wide-reaching as the possibilities of his fretboard, from electric jazz fusion to acoustic world music, Di Meola has built a reputation as a fantastic guitarist. Unencumbered by any particular genre, he remains true to form on Pursuit of a Radical Rhapsody; his exciting Pat Metheny-meets-Baden Powell-meets-Joe Satriani-meets-Andres Segovia style in full display in this collection of mostly original songs.

Like the rest of his body of work, Pursuit is a showcase of Di Meola's technical mastery. His creative exploration of different rhythmic, melodic, and harmonic traditions—in addition to interesting instrumentation including accordion—demonstrate how adept of a player he is, his titular pursuit apparent from the very first note.

In addition to Di Meola's signature style as a shredding jazz man exploring the reaches of fusion and world music, he gives nod to the popular music tradition with pretty interpretations of The Beatles' "Strawberry Fields" and the classic standard, "Over the Rainbow," both featuring bass great, Charlie Haden.

There is something majestic about this record, a masterpiece of careful craftsmanship. Rather than being an intimate record, however, it's more opera house than jazz bar. It's experimental in its instrumentation and fusion of styles; a standard record from a guitar great.

Fans of Di Meola's past records will find plenty to like in Pursuit of Radical Rhapsody; those who've been unconvinced, however, won't likely be swayed in their opinions.