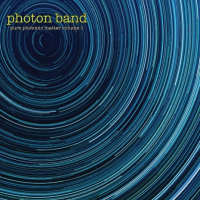 The Philadelphia-based Photon Band conspicuously unites Indie rock with an amalgamation of psychedelics and spacey overtures amid occasional nods to the British punk rock movement and hard-driving proto-punk ensembles such as MC5. This limited edition vinyl release was largely created by the band's leader, guitarist/bassist/vocalist Art di Furia. Some of the rewarding elements can be attributed to the diverse track mix. With stinging psychedelic guitar licks and fuzzed-out chord voicings, di Furia's rather polite vocal delivery institutes a palpable asset that is conducive to alternative rock airplay and repeated listens.

Many of these works include melodic hooks atop punishing backbeats and heavy guitar voicings. It's like you've heard it before, but can't equate the overall sound and style with one particular band. There is a consortium of psycho burnouts and intense jamming metrics, but pieces such as "Found in Space" cast ethereal qualities via analog electronics effects and phased-loop guitar parts. On "Sounding in Fathoms," the music takes on a classic Haight-Ashbury hippie spectrum, with guitar phrasings reminiscent of a Quicksilver Messenger Service jam foray. It's a moveable feast amid distortion-laced riffs to complement a few mid-tempo rockers interspersed within the program.

Di Furia connects the dots from the old to the new on this harmonious venture, firmly rooted in sustainable compositions and not simply a retread effort that dawdles in a superfluous stream of technical gymnastics. Simply put, Pure Photonic Matter Volume 1 is an unanticipated surprise for 2013.